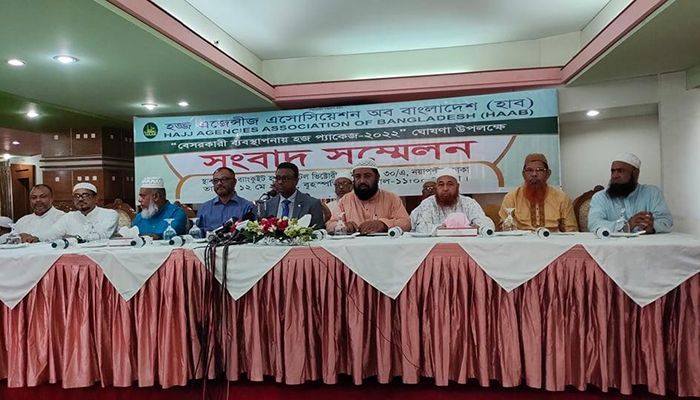 Press conference on the occasion of the announcement of the Hajj package under private management in Naya Paltan. Photo: Shampratik Deshkal

﻿﻿The Hajj Agencies Association of Bangladesh (HAAB) has announced a minimum package of Tk 4, 63,744 this year for privately managed Hajj.

In addition, for the cost of the animal sacrifice, each pilgrim will have to take 810 Saudi riyals equal to Tk 19,683 separately at his own risk.

This information was given by the president of the organization M Shahadat Hossain Taslim at a press conference on the occasion of announcing Hajj Package 2022 under private management in the capital's Naya Paltan on Thursday (May 12).

It was said in the press conference that the cost of animal sacrifice will be out of this package of Hajj. One has to pay 810 riyals separately for the sacrifice. This time the cost of the Hajj package has been increased in 2022 as compared to 2020. The main reason for this is the increase in house rent and plane fares. Those who go will have to deposit the money in the account of the agency and get the receipt by 18th May. All Hajj pilgrims have to have valid passports till 2023.

The HAAB President said that a package called 'General Package' has been formulated for the pilgrims under private management. Each agency will also be able to offer its own special package. However, no package will be less than the minimum package price announced by HAAB.

He said that accommodation for the pilgrims of the general package would be arranged at a distance of one thousand to one thousand five hundred meters from the boundary of the outer courtyard of the Holy Haram Sharif. If the Saudi government imposes any additional fee after the announcement of the package, it will be considered as the package price and it will have to be paid by the pilgrims.

Earlier on Wednesday (May 11), the government announced two packages for Hajj. Package-1 will cost Tk 5 lakh 27 thousand 340 to go for Hajj. Passengers of this package will be within 1000 meters of Masjid-al Haram. And the cost of package-2 has been fixed at Tk 4 lakh 62 thousand. Under this package, the pilgrims will be located within 1500 meters of the Masjid-al Haram in Makkah.

HAAB leaders were present at the press conference.

The holy Hajj may be held on July 9, subject to the sighting of the moon. This year, 57,856 people will be able to go for Hajj from Bangladesh. Of these, 53,000 will have to go through private management.

Saudi Arabia has not allowed anyone from abroad to perform the Hajj after the coronavirus epidemic hit the world. According to official data, 58,745 people performed Hajj last year. Hajj is usually celebrated with the participation of 2.5 million Muslims every year.