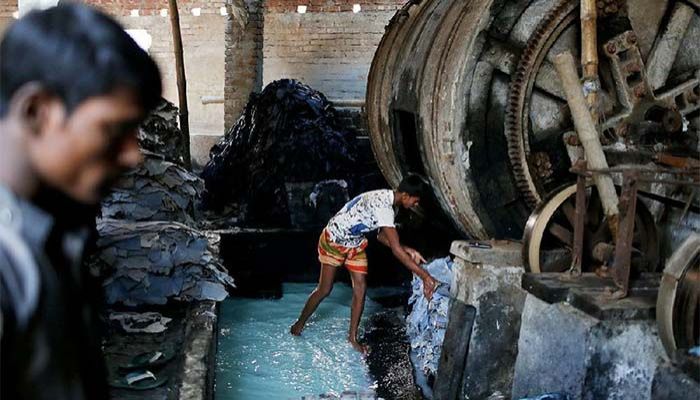 ﻿A parliamentary watchdog on Sunday asked the environment ministry to ensure snapping of power connections to industries under the Savar Tannery Industrial Estate for causing excessive pollution.

The Parliamentary Standing Committee on Environment, Forest, and Climate Change had earlier asked for closure of such polluting industries.

Sunday’s meeting was held at the Jatiya Sangsad Bhaban with ruling Awami League MP Saber Hossain Chowdhury in the chair.

Department of Environment (DoE) today placed grim statistics before the watchdog on the sorry state of Dhaleswari River. It mentioned that aquatic life and bio-diversity of the river has been destroyed by unbridled pollution caused by the Savar Tannery Industrial Estate.

In the meeting, DoE said the minimum level of oxygen of Dhaleswari River should remain 200mg/per liter. But the oxygen level in this river’s water is two to three times less than the permissible limit.

Saber told reporters after the meeting said that not only oxygen level, the amount of metal chromium in Dhaleswari River is also much higher than the permissible level

He said that generally, water should contain 200 mg of oxygen per liter for the habitat of aquatic animals including fish.  But Dhaleshwar river has two to two and a half times less oxygen than that.

In contrast, the tolerable level for the metal chromium, which harms aquatic life and biodiversity, is two milligrams per liter.  But that river has 5 to 7 mg.  As a result Dhaleswari river has now become very dangerous for aquatic life including fish.

The parliamentary body chief said, DoE came up with the statistics following its research on the water of Dhaleswari River in July.

He said that the Industries Minstry has promised to increase the level of oxygen in the next three to six months and try to reduce it.

"We have asked them that if they fail, we will not allow the units responsible for it to continue.  If necessary, the electricity will be turned off," he said.

The parliamentary watch dog in its meeting gave three to six months’ time to the Industries Ministry for taking measures to bring all the industry units in the tannery industry under central effluent treatment plant.

Asked about the committee’s earlier recommendation of closure of tannery in phases, Saber said they still has a tough position.

"But we understand the ministry's position a bit - maybe they are embarrassed to tell another ministry.  Our laws must apply equally to all."

"...it does not happen.  Of course they give many reasons, they say it's about industry, employment-foreign exchange.  But public health and the environment and biodiversity are also important too," he added.

In this context, he also said the committee has been telling the Industries Ministry for the past two years.

"We have made 5/6 recommendations on what measures to take.  But none of it has been implemented.  They just say doing and will do. Now we're at the final point - it has to be done," Saber said.

Separately, a press release of the Parliament Secretariat said that the meeting decided the relevant officials of the Ministry of Planning should be invited to the next meeting to get their views on the mandatory use of block bricks by 2025 in the construction of all government infrastructures, and the provision of financial fines as well as imprisonment for air pollution caused by brick kilns.

That means 15,000 cubic metres of liquid waste are dumped into the Dhaleshwari without any treatment, causing severe pollution.

In 2003, the government took the initiative to build the BSCIC Tannery Industrial Estate on 200 acres in Hemayetpur after moving all tanneries from the capital's Hazaribagh in order to prevent environmental pollution and to protect the Buriganga.

The most alarming matter is that the estate does not have any facility to treat solid waste, including heavy metals and chromium.

The waste is being dumped into the Dhaleshwari without any treatment, causing pollution and severe harm to the environment.

In the last three years, the estate has dumped around 1.60 lakh cubic metres of waste into the river, according to the statistics of DoE.

There are around 160 tanneries in the leather industrial park.

Tanneries and backward and forward linkage industries related to leather goods were accommodated in the new industrial park after it was moved from Hazaribagh in 2003.

The JS body yesterday also expressed concern over the government’s handing over a part of Jungle Khuniya Palong reserved forest in Cox's Bazar to the Bangladesh Football Federation for building a residential training facility after de-reserving the 20-acre land.