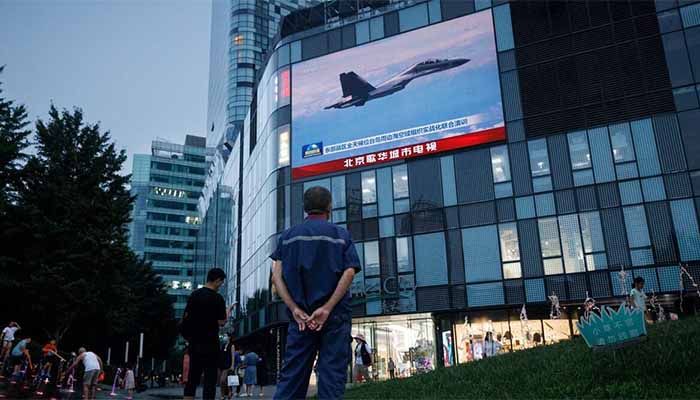 ﻿Taiwan scrambled jets on Wednesday to warn away 27 Chinese aircraft in its air defence zone, the island's defence ministry said, adding that 22 of them crossed the median line separating the self-ruled island from China amid rising tensions.

China demonstrated its outrage over the highest-level US visit to the island in 25 years by US House of Representatives Speaker Nancy Pelosi with a burst of military drills around Taiwan, summoning the American ambassador in Beijing and halting several agricultural imports from the island.

In the latest uptick in tensions across the sensitive Taiwan Strait, Taiwan said it dispatched aircraft and deployed missile systems to "monitor" the Chinese activities into its air defence identification zone, or ADIZ.

Taiwan, which China claims as its own territory, has complained in recent years of repeated missions by the Chinese air force near the democratically governed island, often in the southwestern part of ADIZ.

A source familiar with Taiwan's security planning told Reuters that the 22 jets that crossed the median line did not fly too far into the unofficial buffer from the Chinese side. Neither side's aircraft normally cross the median line.

Earlier on Wednesday, Taiwan said some of China's planned military exercises this week were to take place within Taiwan's 12 nautical mile sea and air territory, an unprecedented move a senior defence official described as "amounting to a sea and air blockade of Taiwan".

China has ramped up military and political pressure to try and force the island to accept Chinese rule. Taiwan rejects China's claims to the island and vows to defend itself.