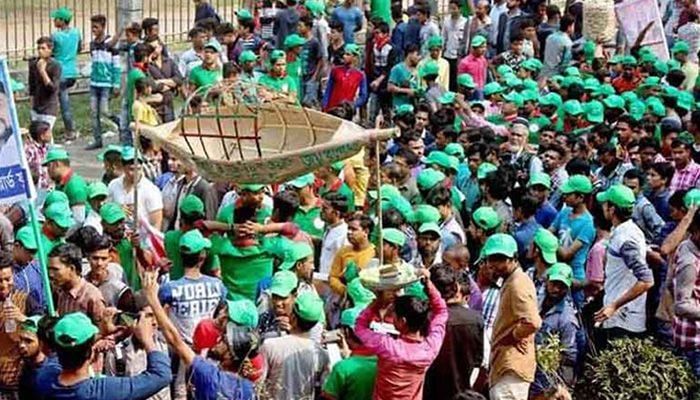 The photo was taken from Awami League rally in Jashore || Image: Collected

﻿﻿Enthusiasm is prevailing throughout Jashore around the arrival of Prime Minister Sheikh Hasina. A target of 10 lakh people has been taken in the public rally. The Premier will be coming to Jessore today Thursday (24 November) after five years. He will address a public rally organized at Jashore Stadium this afternoon.

The central leaders of Awami League said these things after visiting the public meeting yesterday (November 23).

Awami League presidium member Jahangir Kabir Nanak said that all the preparations for the public meeting have been completed. No people from Jashore and surrounding areas will stay at home, they will come to listen to Bangabandhu's daughter Sheikh Hasina for the development of Greater Jashore.

He said, we have gone to the remote areas here, the people there know that Jashore was a scarred town 14 years ago. Jashore and surrounding districts are now experiencing development. The people of this area have always voted for Awami League, the pro-liberation war power.

Nanak said that the news of Prime Minister Sheikh Hasina's arrival in Jashore has created great enthusiasm among the people of this area and said that the entire city will become a public gathering place. 1 million people will gather in the public rally. From this rally, we want to tell the BNP-Jamaat- this Bangladesh is the Bangladesh of the strength of the liberation war.