Afghanistan on the brink of famous win 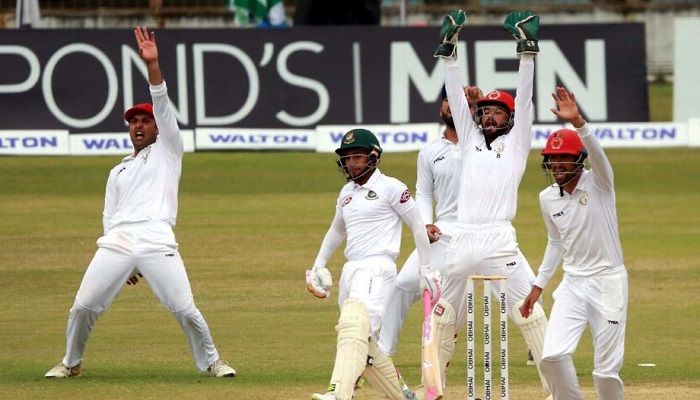 Afghanistan are four wickets away from a remarkable Test win over Bangladesh after they reduced the hosts to 136 for 6 at stumps on the fourth day.

A third bout of rain, however, forced the players off an hour before the scheduled close of play. The start of the morning session was delayed by two hours while the lunch break was extended by 40 minutes, both due to spells of rain.

There is more rain in the offing on the fifth day, leaving the visitors with what looks like some tight sessions to squeeze through the remaining wickets.

Afghanistan did a good job of taking the six wickets on the fourth day. Left-arm wristspinner Zahir Khan made twin strikes immediately after the lunch break. Liton Das missed a delivery that spun back at his pads from over the wicket, while Mosaddek Hossain was caught at wide long-off in an attempted inside-out shot to a wide delivery.

Soon, Mushfiqur Rahim fell to Rashid Khan for the second time in the game, and the sixth time in nine innings across formats. After he had struck a few boundaries with the sweep, Mushfiqur was lbw after missing the ball on the forward press. Mominul Haque, who scored 52 in the first innings, became Rashid's second victim when he too was given lbw to a legbreak that spun back sharply from around the wicket.

Shortly before the tea interval, Rashid dropped Shakib Al Hasan's return catch, but on the other side of the interval, Bangladesh lost two more wickets in quick succession. Mohammad Nabi removed Shadman Islam, who had lasted 114 balls for his 41, before Mahmudullah completed the Test with a pair of sevens, this time getting caught at short leg off Rashid.

Shakib remained unbeaten on 39 off 46 balls, as he walked off in the rain with Soumya Sarkar, demoted all the way down to No. 8 due to a batting order shake-up, who is yet to open his account.

The day's first two hours and ten minutes were lost to rain, after which Afghanistan added 23 runs to their overnight 237 for 8. They were bowled out for 260 in their second innings, with Afsar Zazai remaining unbeaten on 48 off 110 balls.

After half-centuries from Ibrahim Zadran and Asghar Afghan on the third day, Zazai stretched Afghanistan's score by resuming on 34 before Yamin Ahmadzai was run out for 9 and Zahir handed a catch to forward short leg for a two-ball duck.