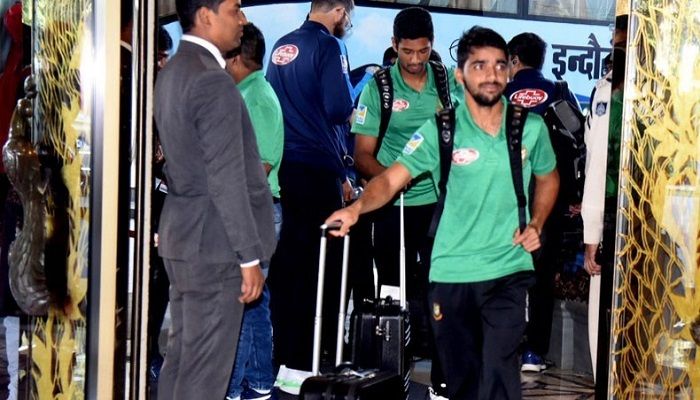 Team tigers will now have to brace themselves for an even more daunting task in the forthcoming two-match Test series ﻿after a disappointing loss in the Twenty20 series-decider against India on Sunday.

Despite Mohammad Naim's brilliant innings of 81 from 48 deliveries, the Tigers fell 30-run short of their target, with India pacer Deepak Chahar claiming 6-7, the best ever bowling figurers in Twenty20 internationals.

Bangladesh can still take solace from the series, as they earned their first-ever Twenty20 victory over their neighboring rivals in the first match, but now they have to prepare for a bigger challenge in the Tests with several big names returning to the Indian team.

But the number one ranked Test team in the world had named a full-strength 15-man squad for the Test series with Kohli, Shami and co returning to their squad.

India, who have won their last 11 Test series at home, a feat never before achieved in cricket history, were aiming to continue their home dominance and were taking no chances against Bangladesh by playing a second string side.

Bangladesh, on the other hand, will have to play in the absence of their regular skipper Sakib al Hasan, due to a ban imposed on him by the International Cricket Council for not reporting corrupt approaches and top-order lynchpin Tamim Iqbal, who skipped the series for family reasons.

Young Bangladeshi players stepped up in the Twenty20 series to somewhat fill in Sakib’s absence, but in the five-day format his absence is likely to be more evident.

Mahmudullah, who led the side in the preceding Twenty20 series, will step down from the captaincy role in the Tests while batsman Mominul Haque will take the mantle for the very first time in his international career.

Mominul will have to bear the pressure of leading a Bangladesh side, who are missing a few key players, against the current best team in Tests in their own backyard, which could shake Mominul’s focus from his main job in the side, playing big innings.

With the second Test match of the series set to be both sides’ inaugural day-night Test match, there will be added pressure on Mominul to make their maiden appearance a memorable one.

How will the 28-year old handle the situation is still left to be seen, but the task at hand for him and the Bangladesh team management now is to figure out how to withstand an Indian side who have been menacing at home with a weakened team.