Tigers stumble after loosing both openers 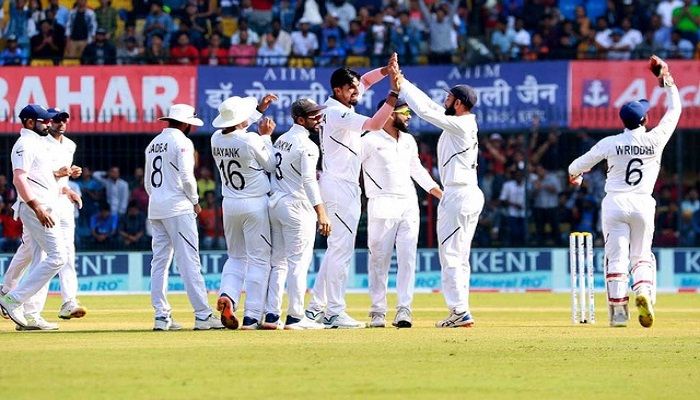 ﻿Bangladesh are fighting to stave off defeat as they begin their second innings of the 1st Test match against India after the hosts declared overnight with a lead of 343 runs in Indore.

But the Tigers were dealt an early blow after both the openers Imrul Kayes (6) and Shadman Islam were bowled by seamer Umesh Yadav and Ishant Sharma.

Mohammod Mithun joined captain Mominul Haque in the middle as Bangladesh face an uphill task to make India bat again in the match.

Earlier, Opener Mayank Agarwal smashed an epic 243 and forged two hundred-plus partnerships to flatten Bangladesh and put India in control of the opening Test on Friday.

The 28-year-old clobbered eight sixes along with 28 fours in his career-best knock before holing out in the deep as India finished day two on a commanding 493-6 for an overall lead of 343 runs.

Ravindra Jadeja, who made a breezy 60 not out, and Umesh Yadav (25 not out) will return on Saturday hoping to bat Bangladesh out of the contest at Indore's Holkar stadium.

India plundered 407 runs on the second day, while Bangladesh were left to rue dropping Agarwal on 32 at slip on Thursday, when Imrul Kayes spilled a routine catch off Abu Jayed's bowling.