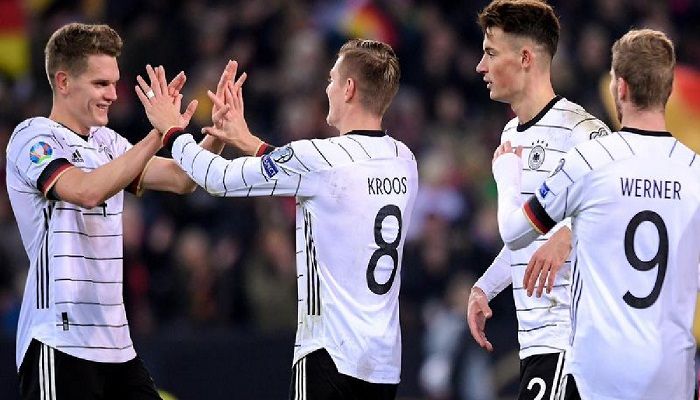 ﻿﻿A brace from Toni Kroos helped Germany to seal their berth at next year's EURO after defeating Belarus 4-0 in a Group C qualifier on Saturday.

Thids is the 13th time in a row Germany have qualified for the European championship after dominating Belarus from the start to the finish. The visitors were able to hold the pace in the first half before Joachim Low's men turned up after the break to score three second-half goals.

The hosts took the reins from the kick off, pushed Belarus on the back foot, but found it hard to beat Belarus goalkeeper Aleksandr Gutor in the opening minutes.

Timo Werner, Serge Gnabry as well as Leon Goretzka created promising chances but Gutor seemed to be an insuperable barrier.

Things changed before the break as Germany were able to turn their dominance into a tangible reward as Gnabry's build-up work on the right wing and spare pass into the box allowed Matthias Ginter to back heel the opener in the 41st minute.

The Germans went further ahead as Goretzka curled home an untouched corner from the edge of the box to double the lead four minutes into the second half.

Belarus were unable to keep the pace as Germany tripled their lead just six minutes later when Kroos benefitted on Ginter's assist to sweep the ball into the top corner.

Germany then retracted and handed over control while Belarus squandered a chance to pull one back when Stanislav Dragun headed wide from inside the box in the 69th minute.

The visitors got another golden chance to reduce the arrears as Robin Koch's foul play inside the box awarded Belarus an attempt from the spot. However, Igor Stasevich was unable to beat Germany custodian Manuel Neuer, who anticipated the bottom right corner and defused the penalty in the 75th minute.

Germany weren't done with the scoring and added the fourth goal as Kroos had all time and space inside the box to wrap up his brace with seven minutes to the final whistle.