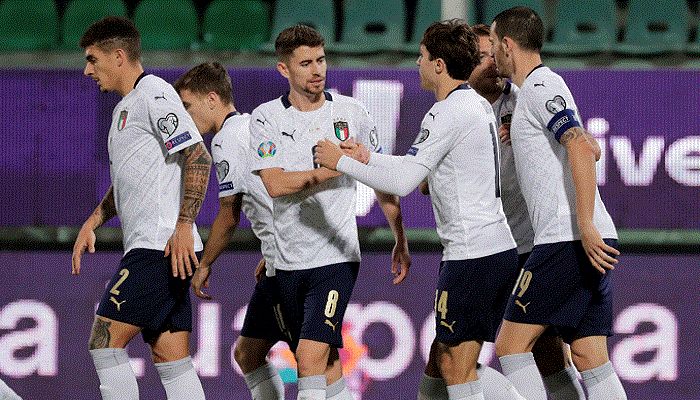 Italy players celebrate one of their nine goals against Armenia in their final Euro 2020 qualifying fixture in Palermo on Monday. Photo: Reuters

﻿Italy thumped Armenia 9-1 on Monday to complete their Euro 2020 qualifying group with a perfect record and extend their record-breaking run to 11 successive international wins as they looked forward to tournament scheduled next year.

Italy also beat the United States in a friendly before the group stage began and their winning run is the longest in their 109-year history.

Armenia finished fifth with 10 points and were eliminated as they cannot qualify through the playoffs.

''I think we have the basis to become a great team for many years,'' said coach Roberto Mancini.

"All of our young players are improving and playing international football adds to the quality they already possess,'' he added.

"We have got six months to prepare for the European Championship and it is going to be difficult to decide who to leave out of the final 23.," Mancini further said.