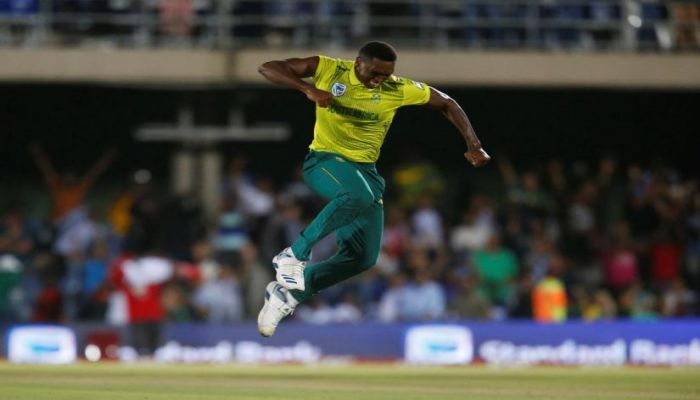 Seamer Lungi Ngidi saved seven runs in the final over to bowl South Africa to an improbable one-run win as England collapsed on Wednesday at the close of the first Twenty20 International.

England required seven of their last seven deliveries, with five wickets left but fell on a sluggish wicket in front of Ngidi's off-cutters to score five runs and lose four wickets.

South Africa recorded 177 for eight in their twenty overs, a historic score in East London, but England was leading when Jason Roy smashed 70 out of 38 balls and captain Eoin Morgan out of 34, an impressive 52.

However, the visitors lost their nerve at the finish, in what will be a tough lesson to be played in Australia in October at the start of the build-up to the Twenty20 World Cup.

"It was an outstanding game of cricket, experiences like this, particularly with the World Cup just around the corner, are so valuable to the team," Morgan said at the post-match presentation.

"Losing by one run you always think you can make it up somewhere along the line, but I thought today in all three departments we could have made up more than that."

Opener Roy delivered excellent straight hitting that included seven fours and three sixes to power at the top of the England order.

He was out with England needing 46 from 34 balls and with seven wickets in hand, a simple enough equation on a docile pitch.

Their cause was bolstered as Morgan took the reins to put them to the verge of success in the final match, but Ngidi (3-30) displayed outstanding skill and discipline to overpower the South African way of the game.

Having earlier picked up the key wicket of Ben Stokes (4), he removed Tom Curran (2) and Moeen Ali (5), before Adil Rashid (1) was run out on the last ball going for a second run that would have tied the game and led to a super over.

South Africa's score of 177 for eight in their 20 overs was boosted by Temba Bavuma’s 43 from 27 balls, his runs coming in an unfamiliar opening position.

"It was pretty interesting towards the end there but we realized we might end up winning if we kept to our principles as a bowling team," said captain Quinton de Kock from South Africa.

"This wicket gets tough to bat on in the last five overs and the way we went about it really pleased me."