Djokovic Disqualified from US Open after Hitting Line Judge with Ball 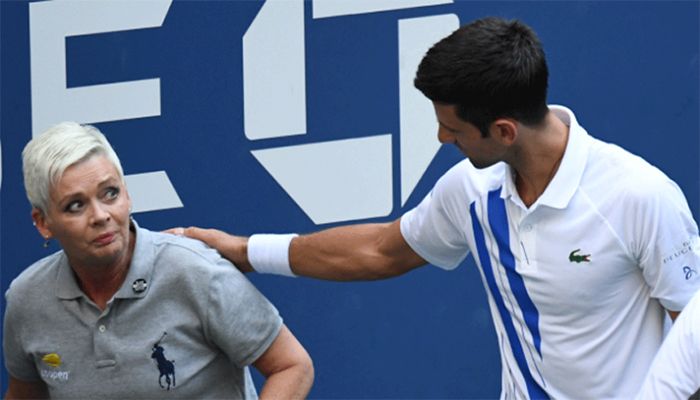 World number one Novak Djokovic was sensationally disqualified in the fourth round of the US Open on Sunday after he hit a line judge with a ball following a point in the first set of his match against Pablo Carreno Busta of Spain.

After suffering a fall, Djokovic became upset and fell to trail 5-6, hitting a ball reasonably hard at the back of the court, hitting a female line judge over the shoulders, Hindustan Times reports.

He apologised immediately and stood over her as she appeared on the floor in distress.

Tournament referee Soeren Friemel then came out on to the Arthur Ashe Stadium and spoke to chair umpire Aurelie Tourte before a lengthy discussion with the 33-year-old Serb, a three-time former US Open winner.

Djokovic made it clear that he had not intended to strike the official, but that his fate had already been sealed under the laws of tennis.

The Grand Slam rules state: “Players shall not at any time physically abuse any official, opponent, spectator or other person within the precincts of the tournament site.

“The referee, in consultation with the Grand Slam chief of supervisors may declare a default for either a single violation of this code.”

In spite of his pleadings, Djokovic was finally disqualified before going over to shake hands with a shocked Carreno Busta and trudging to face the music.

It was an unexpected end to the aspirations of the top seed to win the 18th Grand Slam title — something that appeared highly likely as the fortnight progressed.

“It’s the right decision,” Tim Henman, who was disqualified from Wimbledon for a similar incident in 1995, told Amazon Prime. “He is not aiming for the line judge, but has hit the ball away and you have to be responsible for your actions.”

Former champion Mats Wilander, reviewing the Eurosport activity, said that it was really unfortunate for Djokovic, but that it was the right decision.

“You are not allowed to do that,” he said. “It’s as much bad luck as you can have on a tennis court. He didn’t just roll the ball back to the ball kid, that’s the bottom line.

“He hit it harder than he intended to, obviously a complete accident. It was a sign of frustration, yes. A little bit. But it doesn’t matter, you are not allowed to do it.”

Incredible advances have blown the draw wide open, with the defense champion Rafa Nadal and Roger Federer absent this year in particular. Nadal chose not to fly to New York due to worries about the Covid-19 pandemic, though Federer is recovering from knee surgery.

The world number one by average sent shockwaves across Flushing Meadows that have seen many insane events over the years.

“I’m a little bit in shock right now, to be honest,” Alexander Zverev told reporters after his own fourth-round win over Alejandro Davidovich Fokina.

Carreno Busta is now facing the quarter-final against either Denis Shapovalov or David Goffin, the seventh seed.

The Spokesperson of the Tournament told Reuters that the line judge seems to be all right and was not taken off-site. Her past is not clear to her.