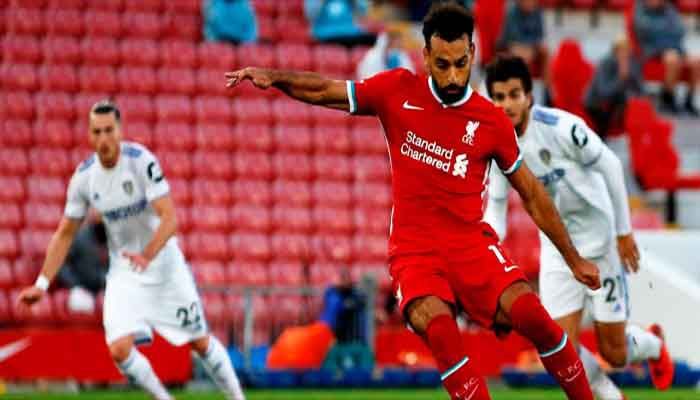 ﻿Mohamed Salah scored a hat-trick as Liverpool saw off three fightbacks from Leeds to begin their defence of the Premier League with a thrilling 4-3 win at Anfield.

Leeds' return to the English top-flight under Marcelo Bielsa after a 16-year absence was highly anticipated and a clash against the reigning champions lived up to expectations as three times they equalised through Jack Harrison, Patrick Bamford and Mateusz Klich to cancel out Salah's first-half double and Virgil van Dijk's header.

However, Salah's second penalty of the game two minutes from time ensured Liverpool got off to a winning start.

Liverpool dropped points at Anfield just once on their romp to a first league title in 30 years last season but were nearly undone on the opening day of their title defence by Leeds' daring attacking endeavour and a host of defensive errors.

The hosts made the perfect start when Salah's shot was handled inside the box by Robin Koch and the Egyptian rifled home the resulting penalty.

True to coach Bielsa's philosophy, Leeds were not intimidated by the blow of conceding early and came out to go toe-to-toe with the champions.

Harrison equalised in style as the on-loan Manchester City winger cut inside Trent Alexander-Arnold and Joe Gomez before firing low and hard past Alisson Becker.

But it was at the back Leeds looked like a newly-promoted side as slack marking allowed Van Dijk a free header which Illan Meslier should have saved rather than letting the ball trickle over the line.

Van Dijk has been near-faultless in two-and-a-half seasons since his signing transformed Liverpool's fortunes under Klopp.

However, a shootout was reminiscent of the German's early days in charge at Anfield as Van Dijk was badly at fault for Leeds' second as his attempted clearance teed up Bamford perfectly to side-foot beyond Alisson.