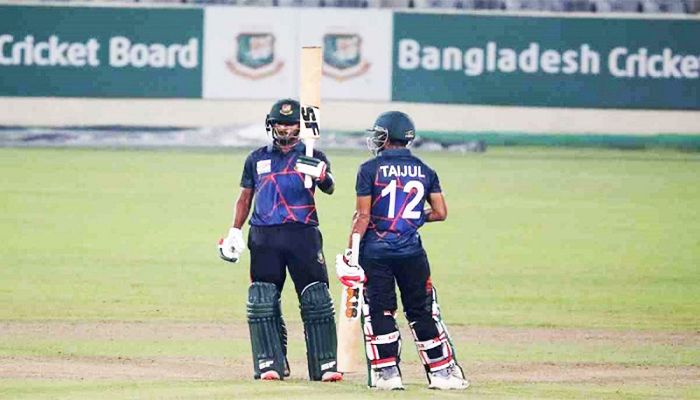 Mushfiqur scored the first century of the tournament making 103 runs but that was not enough as they were bowled out for 189 In 45.4 overs, chasing 222 to win.

As a result, Tamim XI won by 42 runs to open their account in the competition. Left-arm pace bowler Shoriful Islam and Mustafizur Rahman shared seven-wicket among themselves after Mahedi Hasan scripted a brilliant comeback earlier with his superlative 57-ball 82 that helped them post 221 runs after struggling initially.

Nazmul won the all-important toss and decided to bowl first and it looked to be perfect until the arrival of Mahedi as he shared 92 runs for the ninth wicket with Taijul Islam (20 not out) before being removed in the last over by Mukidol Islam.

The dashing batsman played nine boundaries and three sixes in the game to make the highest score of the competition so far.

Tamim Iqbal(33) and Shahadat Hossain made (31) made useful contributions but rescued them from despair as they were struggling on 108-7 at one stage. Al Amin Hossain picked 3-43 while off-spinner Nayeem Hasan grabbed 2-28. World Champion Under-19 captain Akbar Ali featured for Nazmul XI for the first time in the tournament but failed to make an impact scoring only two runs.

Nazmul XI won their first match against Mahmudullah XI by four wickets while Tamim XI conceded a defeat at the same margin to the Mahmudullah XI.

While a victory would help Nazmul XI to make a giant stride towards the final, a defeat would make Tamim XI’s chance to move into the final tougher one.