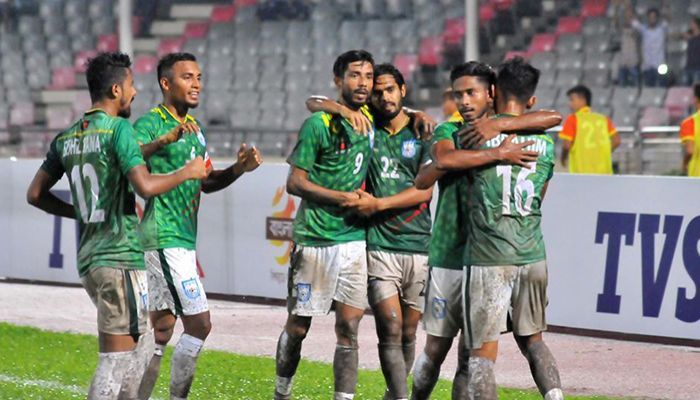 The men in red and green beat the touring side by 2-0 goals in the first match to take 1-0 lead in the series at the same venue on Friday. Forward Nabib Newaz Ziban and substitute forward Mahbubur Rahman Sufil scored one each for the winning side.

The national team won the SAFF Championship in 2003. With the day's feat, they ended the 17-year drought of series win.

However, Bangladesh got a big blow a day before the game as the head coach Jamie Day tested positive for COVID-19 in the second test. The team appeared on the pitch under the supervision of acting head coach and assistant coach Stuart Watkiss.

At BNS on Tuesday, both teams tried to dominate each other from the beginning of the game. Forward Ziban was smartly denied in the 20th minute by Nepal goalkeeper Kiran Limbu. Sumon Reza, another forward, fired off the mark from outside the box after four minutes.

In the first half of the year, Bangladeshi strikers had several more opportunities to open account, but all their efforts were in vain. In the 28th and 31st minutes, Forward Sumon and Saad Uddin failed to connect the ball respectively.

Defender Rahmat Mia wasted another close chance in the 42nd minute as his long powerful shot missed the target. The Nepalese side also tried hard to score but failed to send the ball home correctly.

Both teams began to play aggressively in the second half, but they stayed goalless. In the 51st minute, defender Bishwanath Ghosh missed the mark, while Nepal's forward replacement Nawayug Paswan hit the post just a few minutes before the final whistle.

An adolescent Bangladeshi fan named Hasib breached the security cord halfway through the second half to click on a selfie with Captain Jamal Bhuiyan. Jamal was seen attempting to escape the fan's embrace as he was dragged away by the security personnel.

After the match, Chairman of the Standing Committee on Ministry of Youth and Sports Abdullah Al Islam Jakob distributed prizes as the chief guest in a closing ceremony. Bangladesh Football Federation (BFF) President Kazi Md Slahuddin and other executive committee members were also present there. Forward Mahbubur Rahman Sufil adjudged the most valuable player of the tournament.

In his immediate reaction, Bangladesh Acting Head Coach Watkiss said, “It was a difficult match, Nepal played very well tonight. Unfortunately, we didn’t create chances. However, these matches will help massively ahead of the Qatar game. Players haven’t played for seven or eight months. It is such a long time to go without football. Two games obviously proved very worthwhile.”

Nepal head coach, Bal Gopal Maharjan said, “The preparation was short. I really appreciate my boys and am thankful to them for this result. I appreciate their performance. It was better than the first match. Bangladesh team were also good.”