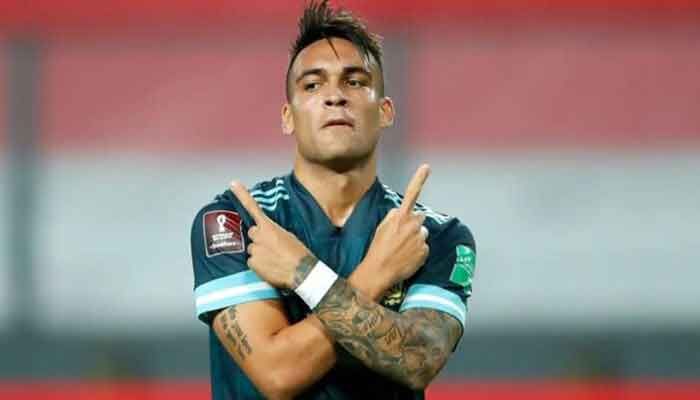 Nicolas Gonzalez continued his rapid rise and as Argentina maintained their undefeated start to the CONMEBOL World Cup qualifying with a 2-0 victory over Peru, Lautaro Martinez was on goal.

Last time out, Argentina's perfect record ended in a draw against Paraguay, but the Albiceleste remained unbeaten on the road to Qatar 2022 thanks to Gonzalez and Martinez in Lima on Tuesday, reports Goal.com.

Gonzalez, who scored in the stalemate in Paraguay, opened the scoring in five appearances in the 17th minute with his second international goal before Martinez doubled Argentina's lead 11 minutes later.

Argentina remains second with the outcome and two points behind Brazil's CONMEBOL leaders after four matchdays.

Peru started at the Estadio Nacional on the front foot, where within the ninth minute Christian Cueva pleaded for a penalty but the referee waived it after a pitch-side analysis, Argentina goalkeeper Franco Armani was adjudged not to have made contact.

Pedro Gallese did not have anything to do, but after Gonzalez capped a fine team goal, Giovani Lo Celso was forced to catch the ball from his net, creating space in a sublime movement before laying off a pass with the outside of his boot as the former finished powerfully across the Peruvian goalkeeper.

When Lionel Messi played a throughball for Nicolas Tagliafico, who was denied by a last-ditch block in the 24th minute, he almost helped double Argentina's lead.

Argentina, though, did get their second goal four minutes later after Martinez broke the offside trap, running onto Leandro Paredes' pass down the middle and rounding Gallese in a swift attacking move.

Although Peru ended the half strongly, they had little to show for it while in the second half they kept building some momentum.

With his first touch, Lucas Ocampos almost scored a goal, but Gallese made a fine save approaching the hour-mark after Martinez was almost released by Messi's exquisite pass.

Messi tried desperately to get on the scoresheet, but he had his penalty appeals waived away and his goal-bound effort was deflected for a corner, while substitute Angel Di Maria was thwarted by Gallese.