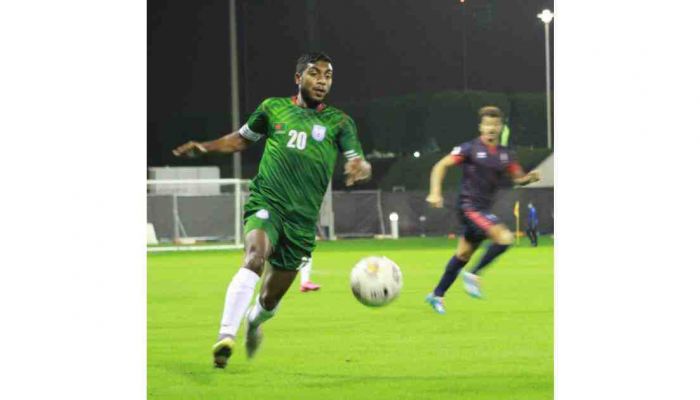 ﻿Bangladesh National Football team, now in Doha, lost both of their preparatory matches against local teams ahead of their FIFA World Cup 2022 and Asian Cup 2023 Qualifiers against Qatar on December 4.

Abdulrahman Mosed scored the match-winner for Lusail SC in the 24th minute of the match.

Earlier, Bangladesh started their campaign in FIFA and AFC joint qualifiers last year with a 0-1 defeat against Afghanistan in the first match in the Tajik capital of Dushanbe on September 10. It conceded a 0-2 goal defeat against Asian champions Qatar in the second match in Dhaka on October 10 and played to a 1-1 draw against India in their third match in Kolkata on October 15 while conceded 1-4 goal defeat against Oman in the fourth match at the Seeb Sports Stadium in Al Seeb city of Oman on November 14.

In the five-team Group E, Qatar is now leading the point table with 13 points from five matches while Bangladesh are at the bottom place with one point from four matches. Among others, Oman secured 12, Afghanistan 4 and India 3 points.

Meanwhile,  Bangladesh team moved three steps ahead in the latest ranking of FIFA to place 184th  from 187th after clinching the two-match Mujib Borsho FIFA International Series against upper ranked Nepal recently. It beat the Himalayan nation 2-0 in the 1st match and played to a goalless draw in the 2nd match at the Bangabandhu National Stadium in Dhaka.

With the series, Bangladesh not only smartly returned to the international football after about ten months, but also earned morale boost-up ahead of their tough match against Asian giant Qatar billed for December 4.