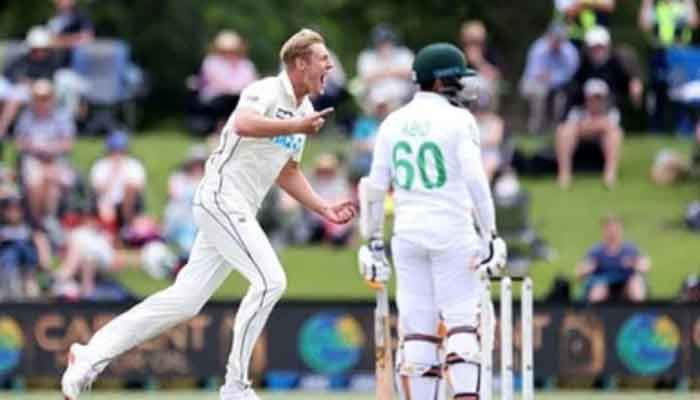 On Wednesday, on-fire New Zealand fast bowler Kyle Jamieson proceeded to torment Pakistan as the tourists lost two wickets in their battle for survival in the second test in Christchurch before lunch.

At the interval, Pakistan were 69 for three, needing another 293 runs to make New Zealand bat again with five sessions remaining.

When Pakistan resumed the day at eight for one, Mohammad Abbas was unable from the first test to repeat his 79-minute nightwatchman resistance and was caught in the fifth over behind Trent Boult.

Abbas' dismissal for three left Pakistan 17 for two, looking to bat long with Abid Ali and Azhar Ali to give them a chance to escape with a draw.

But with the score on 46, the 2.3 metre (6ft 8in) Jamieson struck with the wicket of Abid Ali for 26 to go with his dismissal of Shan Masood the previous evening for a duck.

Jamieson whipped up a fuller delivery after using his height to generate extra bounce and push Abid Ali on to the back foot, and the batsman's attempt to turn to a drive was sliced to the backward point where replacement Will Young took a one-handed, diving catch.

Jamieson has figures of two for six off eight overs in just his sixth test, to go with his five wickets in the first innings.

He took five wickets in the first Pakistan Test and 11 across the two West Indies Tests before that.

The 26-year-old started his senior career as a batsman and from six Test innings he averages 56.50.