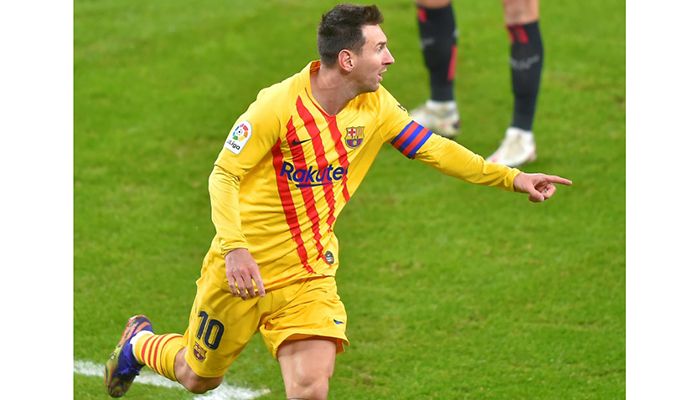 Messi's double helped Barca reduce the gap behind La Liga's leaders Atletico Madrid to seven points, even if Atletico will be hard to catch, given they also have two games in hand.

Koeman admitted last week it would be "very difficult" to close the gap but was more optimistic after the victory at San Mames.

"There is always a chance," he said. "The season is very long and you can have ups and downs. It may be that one team that is doing very well will later find it difficult."

Barca trailed to an early Inaki Williams strike but responded with a slick attacking performance that had Messi at the heart of it.

It was his cross that led to Pedri's equaliser and then the Argentinian could have had a hat-trick, only for VAR and the woodwork to intervene.

But this was a vintage display from the 33-year-old, perhaps his best of the season so far, at a time when his future at Barcelona remains up in the air.

Only a late mistake took some of the shine off Messi's night, a poor pass allowing Iker Muniain to finish and make the result look closer than it was.

Bilbao had scored in the third minute and the 90th, each time exposing Barcelona's defensive frailties that remain unsolved.

Yet in between, Koeman's team were able to dictate the match and demonstrate why going forward they are still a force to be reckoned with.