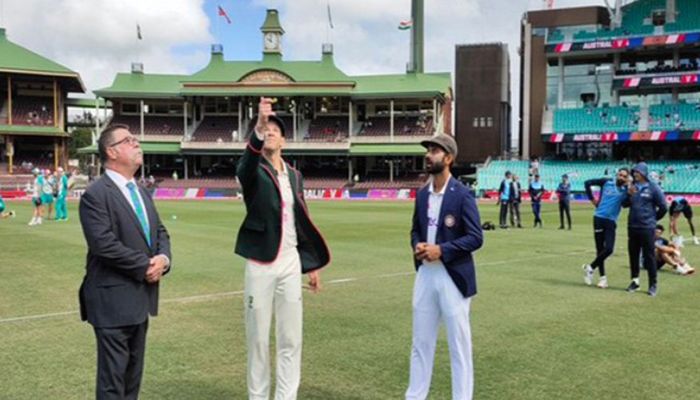 ﻿Australian captain Tim Paine won the toss and elected to bat in the third Test against India at the Sydney Cricket Ground on Thursday with the series level at 1-1.

On a cloudy day, with a chance of showers forecast, the hosts have been boosted by the return of David Warner, with debutant Will Pucovski confirmed as his opening partner after incumbent Joe Burns was dumped.

Matthew Wade, who opened in the first two Tests, drops back to number five, with Travis Head axed.

"We know where we can improve and we can talk about it all we like, but now it's time for action," said Paine.

"Will Pucovski, we know the talent he has got and we're as excited as anyone to see him go out there this morning.

The visitors made two changes to the team that won in Melbourne by eight wickets, bouncing back from an eight-wicket defeat at Adelaide.

The experienced Rohit Sharma, who missed the first two Tests, returns from injury to open the innings in place of out-of-form Mayank Agarwal.

Navdeep Saini makes his debut after fast bowler Umesh Yadav was ruled out with a calf problem.

"Very excited to have Rohit back, he's looked really good in the nets," said India skipper Ajinkya Rahane. "What happened in Melbourne is history, we have to start fresh here."

Up to 10,000 fans are allowed into the ground -- one-quarter capacity -- under strict social distancing protocols as the city battles a coronavirus outbreak.