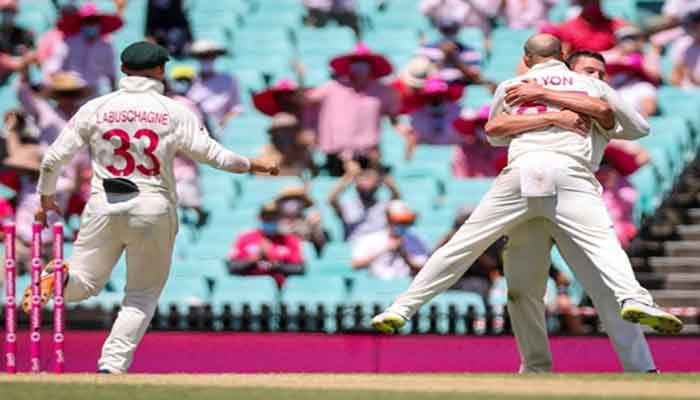 The dogged Cheteshwar Pujara remained undefeated as Australia took two wickets to mount pressure on India, which was trailing by 158 after the opening session of day three in the third test on Saturday.

On a fine day in front of a small socially distanced crowd at the Sydney Cricket Ground, India resumed on 96 for two in response to Australia's first inning 338, built on the back of the Steve Smith century, reports AFP.

By lunch, they had moved to 180 for four with Pujara facing 144 balls for his 42. Rishabh Pant was not out 29, accelerating the scoring to leave the match in the balance.

They lost captain Ajinkya Rahane for 22, bowled by Pat Cummins, and Hanuma Vihari, who was sensationally run out by Josh Hazlewood for four. It was mostly slow-going for India, pinned down by Australia’s bowlers, who offered little respite as they consistently hit line and length.

A cautious Pujara began on nine and Rahane two after Hazlewood and Cummins dismissed openers Rohit Sharma (26) and Shubman Gill (50) in the final session on Friday.

Rahane, who scored a century in the last Test at Melbourne, had an escape on 16, with a Nathan Lyon delivery ballooning to Matthew Wade at short leg, who could only get his fingertips on the ball as he leapt backwards.

The skipper then whacked Lyon for a big six before his new-found aggression cost him his wicket, chopping a Cummins ball onto his stumps in the next over.

Pujara continued what he does best at the other end, grinding out singles while occasionally opening his bat, smacking two boundaries off one Lyon over.

Vihari, who has struggled for runs, got four on the board before needlessly throwing away his wicket, coming down the pitch for a single off Lyon that wasn’t there.

Hazlewood reacted brilliantly, diving to his right and throwing the ball at the stumps in one movement to end Vihari's short stay.

That brought the exuberant Pant to the crease, and he began attacking the bowlers, building a 38-year partnership with Pujara.