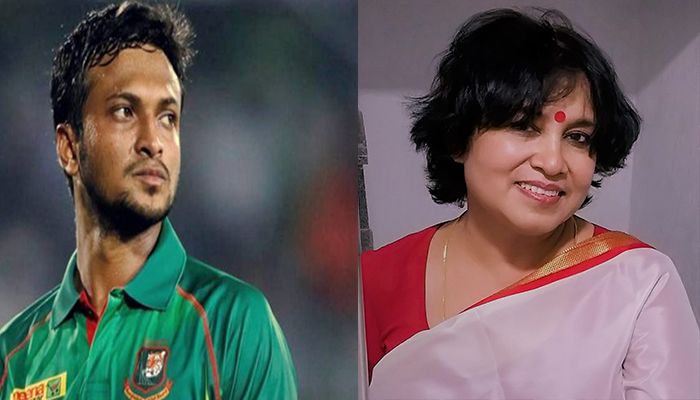 ﻿Famous Bangladeshi writer Taslima Nasreen took to Facebook to criticize Bangladesh star all-rounder Shakib Al Hasan for a tweet he has not even made.

Taslima recently was slammed by Twitterati over a disrespectful tweet on English cricketer Moen Ali saying that he would have gone to Syria and join ISIS if he hadn't stuck with cricket.

England crickets and people around the world quickly reacted to this and slammed her for contemplating a statement like this.

Meanwhile, Taslima took to Twitter and Facebook protesting hate speeches against her. While she reacted to people's comments, she wrongly accused Bangladesh ace all-rounder Shakib Al Hasan for criticizing her while Shakib didn't even say anything.

It was English cricketer Saqib Mahmood who called Taslima a disgusting woman for disrespecting Moeen Ali, not Shakib Al Hasan.

But Taslima, in her Facebook post slammed Shakib Al Hasan over issuing a public apology after worshiping Goddess Kali in Kolkata. She wrote, ''Bangladesh cricketer Shakib also abused me a lot saying, 'Disgusting Tweet, Disgusting Individual'. This means it's about to be the most delusional time of the year, as well. Shakib, however, went to the inauguration of Durga Puja in Calcutta and was attacked by the Muslim fundamentalists of Bangladesh, but he did not call their attack disgusting, nor did he call them disgusting. I wrote a column in favor of Shakib, Shakib has the right to go where he is happy, to inaugurate anything, why Shakib has to give an explanation. And what did Shakib do? He apologized to those who attacked him, saying he should not go to worship, he is a strong believer in Islam, and Islam is the best religion in the world. He attacked me and made those who attacked him happy. Strategies that I don’t know, that’s why I love myself a little more.''