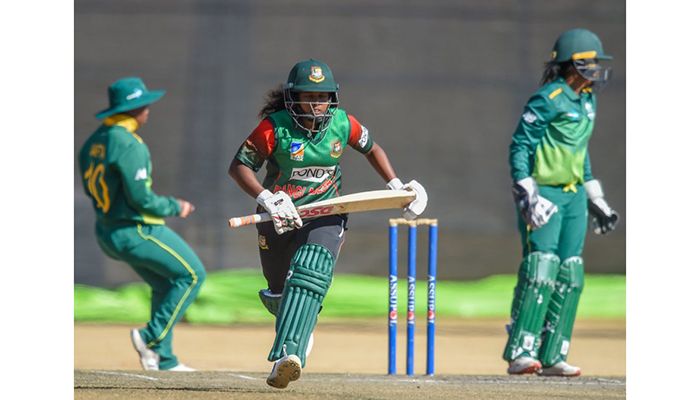 ﻿Bangladesh Emerging Women team put up yet another dominating show to clinch the five-match one-day series against South African Emerging Women as they secured a six-wicket victory in the third match at Sylhet International Cricket Stadium on Thursday.

This was the Bangladeshi women's third straight victory, having won the first two matches by 54 runs and seven wickets respectively, which enabled them to take an unassailable 3-0 lead.

Opting to bat first, the visitors, for whom the match was a must-win game to stay alive in the series, could pile up just 92 runs before being all out in 33.3 overs. The hosts overhauled the target with ease, making 93-4 in 28 overs.

Only four South African batters could reach double-digit figures with Anneke Bosch making the highest 30. Opener Andrie Steyn scored 19 while Michaela Andrews contributed with 18. Nondumiso Shangase was the other batter to score 11.

Opener Murshida Khatun led the charge with 46 runs as Bangladesh women faced a little hiccup on their way to have a facile victory. Fargana Hoque was the other notable scorer with 16 while captain Nigar Sultana Joty who hammered a century in the last match scored 13.

The fourth match is on April 10 at the same venue.