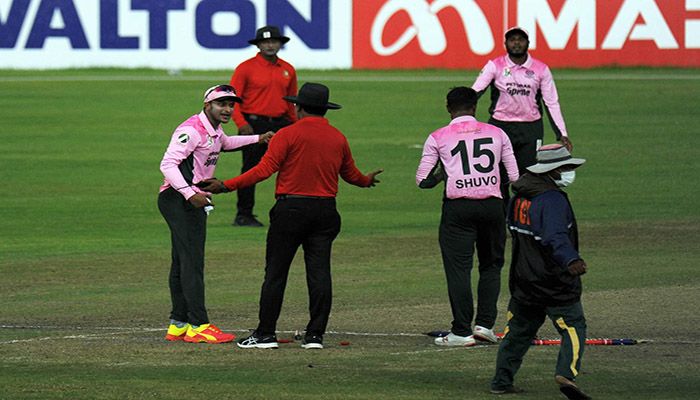 ﻿In a match that turned out to be a heated clash due to Shakib Al Hasan’s on the field misdemeanor, Mohammedan Sporting Club achieved their first victory against the arch-rivals Abahani Limited in the Bangabandhu Dhaka Premier League (DPL), edging them past by 31 runs through DLS system at Sher-e-Bangla National Cricket Stadium.

By virtue of this victory, Mohammedan also ended their three-match losing streak, which effectively kept their hopes alive to seal the Super Six spot. The victory was Mohammedan’s first against the old foes since 2014.

Electing to bat first, Mohammedan were restricted to 145-6 and sensed a victory, leaving Abahani 31-3 in 5.5 overs, before the rain arrived. As the weather permitted the game after some 80 minutes, the revised target of Abahani stood 76 in 9 overs, which meant they needed 45 runs off 19 balls.

Offspinner Shuvagata Hom struck twice in the first over to leave Abahani two-wicket down for 0 runs before striking again in his second over. With Abahani at 9-3, it was all about Mohammedan’s game but Mushfiqur Rahim resisted and looked in supreme touch.

Mohammedan captain Shakib then saw his leg-before wicket appeal against Mushfiqur turned down, which angered him so much so that he went up to the umpire and kicked the stump.

That was not the end. As the dark clouds hovering over the sky, the umpires asked the covers to be brought on but Shakib came in and threw down the stumps before leaving the ground.

Once the game started, Abahani’s target was literally improbable and they looked completely bogged down. Mushfiqur was unbeaten on run-a-ball-18.

Earlier, Shakib was in patchy form with the willow top-scored for the side with 27 ball-37, hitting one four and two sixes. Mahmudul Hasan was the other notable scorer for Mohammedan with 30 off 22.