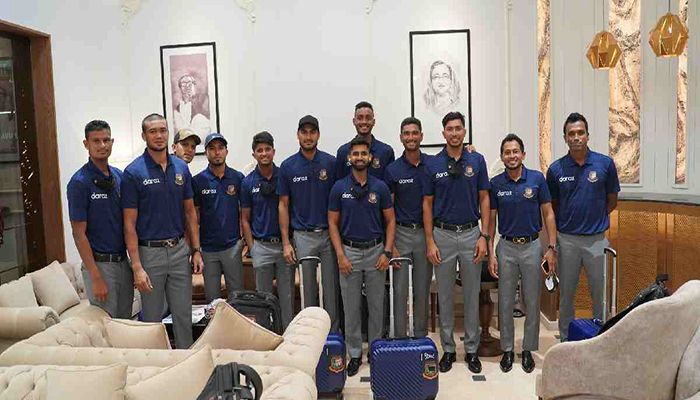 There was uncertainty over Bangladesh’s departure due to the tropical cyclone Shaheen that hit Oman on Sunday.

Due to the cyclone, the Muscat International Airport postponed all flights indefinitely. However, the better weather helped the authorities to resume the operation of the airprot.

Bangladesh team was originally scheduled to leave Dhaka at 10:45 pm on Sunday which was delayed due to inclement weather.

After a five-day camp in Oman, Bangladesh will travel to the UAE on October 9 to play two warm-up matches against Sri Lanka and Ireland. They will return to Oman on October 15.

In the first round of the World Cup, Bangladesh will take on Scotland, Oman and Papua New Guinea on October 17, 19 and 21.

If Bangladesh can end up as the champion of Group B in the first round, they will join Afghanistan, India, New Zealand, Pakistan, and A 1 in Group 2 in Super 12s. All the matches of Super 12s will take place in the UAE.

BCB had announced the squad for the World Cup on September 9.

Mahmudullah Riyad will lead the Tigers in the T20 World Cup. The team, however, will miss the service of Tamim Iqbal. The ace opener opted to not take part in the World Cup as he lacks enough match time due to a knee injury.

Bangladesh includes six members who are set to play their first World Cup.