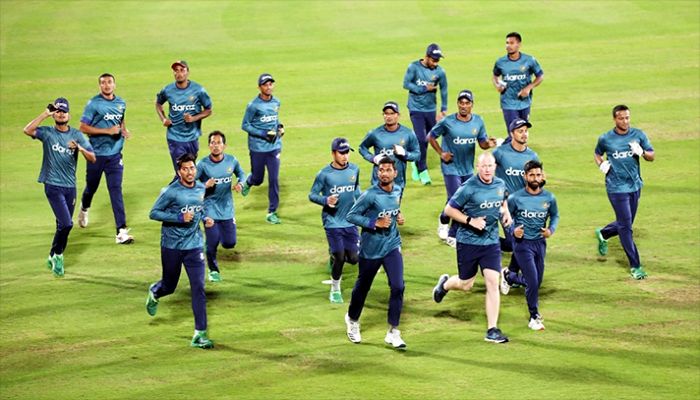 After Oman’s tournament opener with Papua New Guinea earlier in the day, attention will turn to the second match of Group B of the First Round, with Bangladesh facing Scotland in Al Amerat.

Bangladesh once again enter through the ICC Men's T20 World Cup's First Round, having done the same in the last two 16-team tournaments. While yet to slip in the four-team group phase, they face a tricky proposition in this year’s competition, and take on arguably the strongest of their group opponents first up in the form of a Scottish team hungry for global tournament success.

Appearing at three T20 World Cups, Scotland’s record of just one win in seven matches is perhaps a little unfair, considering final over losses to both Afghanistan and Zimbabwe at the 2016 tournament. Scotland have won 16 of their 30 T20I matches since the disappointment of the Indian campaign, and qualified for this year’s tournament after a thumping 90-run do-or-die victory over UAE in Dubai.

The two teams are yet to cross paths in the tournament’s history, with Scotland victorious in their solitary T20I meeting nine years ago. On neutral Dutch territory, Richie Berrington plundered an even 100 off just 58 balls to set Bangladesh 163 for victory, with a then T20I debutant Josh Davey taking three wickets in a 34-run victory over the Tigers.

Berrington, Davey and three other members of that winning side feature in Scotland’s tournament squad, including Kyle Coetzer, now captain of the side and opening the batting. Coetzer (1411 runs) only trails Berrington (1517) as the most prolific run-scorer for Scotland, with the skipper leading his side to victories in seven of their last 11 match-ups.

On the other side, Mahmud Ullah has similar form leading his chargers, thanks to two five-match home series victories over Australia (4-1) and New Zealand (3-2). Only South Africa’s 12 T20I victories in the calendar year better Bangladesh’s nine, with a 2-1 series victory against Zimbabwe to add to their preparation.

Bangladesh’s skipper, Shakib Al Hasan and Mushfiqur Rahim are the only squad members at this year’s tournament from the 2012 side that fell to Scotland, with Shakib’s 31 the top score in Bangladesh’s resistance on that particular afternoon. His bowling was largely negotiated though, finishing with figures of 1/37 from his four-over allotment.

Outsiders in this particular match-up, a win for Scotland in this fixture would throw Group B wide open.