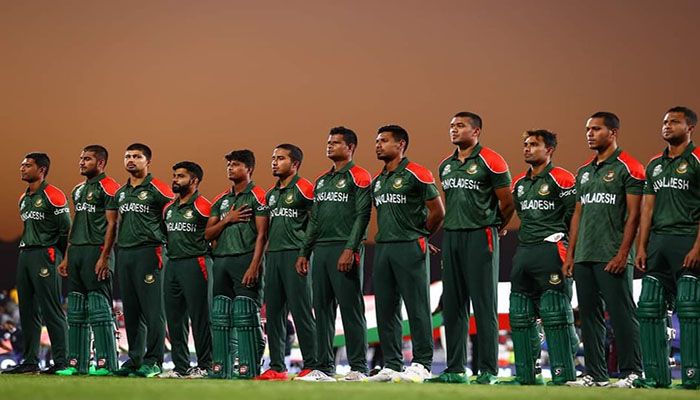 Desperate to hit back into the winning way in the ongoing Twenty20 World Cup, Bangladesh will take on England in their second match of the Super 12 tomorrow (Wednesday) at Jayed Cricket Stadium in Abu Dhabi, United Arab Emirates (UAE), reports BSS.

The match which will start at 4 PM (Bangladesh Standard Time) will be aired live on Gazi TV and T Sports.

The match will mark Bangladesh's first meeting with the English in this format.

Despite playing 116 T20 matches, spanning over 15 years, Bangladesh had never faced off England in the shortest format of cricket. They were supposed to play a three-match ODI and the same number of T20 matches against the English at home this year in September but the tour was cancelled later as the England players were busy with the IPL.

While Bangladesh began the Super 12 mission in a disappointing fashion, losing the game to Sri Lanka by five wickets, England are flying high after a crushing win over defending champions West Indies.

This was kind of a revenge mission for Eoin Morgan and his troops, who lost the last T20 World Cup final to West Indies in 2016. But the Caribbean side was no match this time for the 2019 ODI World Cup Champions England who firstly skittled them out for just 55 runs in Dubai before securing a six-wicket victory.

Bangladesh batted well against Sri Lanka and posted a respectable 171-4 in a solid batting pitch and could have well won the match, had Liton Das not shelled the catch of Charith Asalanka and Bhanuka Rajapakse, who combined for a 86 off 52 for the fifth wicket to sail the side home. Asalanka who blasted an unbeaten 80 off 49 was key after Bangladesh led by Shakib Al Hasan left Sri Lanka in cornered position, reducing them to 79-4 in the 10th over.

Lipton's grave blunder however put shed on poor captaincy by Mahmudullah, who missed the trick by bowling with the part-time bowlers in the middle overs when Shakib and Mustafizur had ample overs left. Asalanka and Rajapakse who was still struggling to get their eye in got their fluency by picking up 31 runs in the two overs bowled by two part-time bowlers-Afif Hossain and Mahmudullah himself in the 13th and 14th over of the match.

Mahmudullah though admitted they misread the pitch and couldn't do the things right after the 10th over, he vowed to learn from the mistakes.

The Tigers however could seek confidence from the performance against the English in the global event. Before losing to England in the 2019 ODI World Cup, they defeated them in the 2011 and 2015 editions.

But Bangladesh is the team that England could thank from their heart. England's loss to Bangladesh in the 2015 ODI World Cup forced the management to overhaul the team completely and they reaped the rewards by being the finest team in the limited over cricket (ODI and T20) after the sweeping changes.

Nevertheless, Bangladesh still have the chance to make their first meet against England remarkable as the Abu Dhabi pitch tend to favour the spinners. So far, only one match of the Super 12 was held here where Australia secured a five-wicket victory but they needed to play 19.4 overs to overhaul South Africa's paltry 118-9.

The spinners of both the teams got some advantage there. And England have historically weakness against spin in the Asian pitch.

The Tigers' stat in T20 cricket is not up to the mark. They so far played 116 matches and won 43. They had lost a staggering number of 71 matches while two matches fetched no result.

They so far played 28 matches in the World Cup of this shortest version of cricket and won just seven-six of which including the latest win against Papua New Guinea came in the qualifying round. They won only one match against West Indies in the tournament proper.