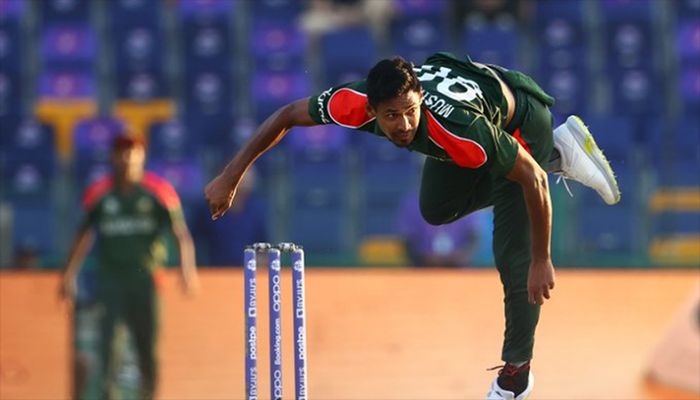 The bowlers gave Bangladesh a good start as Mustafizur Rahman removed opener, Evin Lewis, for just six runs and Mahedi Hasan dislodged the stumps of Chris Gayle when the `universe boss’ was on four.

In the power-play, West Indies managed only 29-2.

Shimron Hetmayer also departed early, after being dropped by Mahedi in the previous ball he took the aerial route in the very next ball and get caught at the long-off by Soumya Sarkar.

Roston Chase was holding one end while on the other end, the Caribbeans saw frequent changes.

Kieron Pollard retired after scoring eight runs and Andre Russel departed on the very next ball in the unluckiest manner as the straightly driven ball dislodged the stumps at the non-striker’s end where Taskin Ahmed just somehow managed to touch the ball.

Quick successive wickets held the run flow but it was Nicholas Pooran who decided to free his arms and gave West Indies the boost.

Chase also rode his luck as he dropped by Mahedi at deep-midwicket when he was on 28.

Pooran departed in the first ball of the 19th over when he tried to go with full-swing against Shoriful Islam but ended up getting caught by Mohammad Naim after playing a knock of 40 runs from just 22 balls.

In the very next ball, Shoriful rattled the stumps of Roston Chase (39) and created a chance for a hat-trick but Jason Holder kept his nerve cool.

He got the opportunity to pick another wicket in the same over but Afif Hossain could not hold the ball in his palms to remove Holder.

Mustafiz started the last over with a wicket in the very first ball as Dwayne Bravo (one )  gave a catch to Soumya Sarkar.

But in the next two balls, he was smoked for two massive sixes by Holder, who was dropped by Afif on one.

Pollard returned to bat and he also finished the West Indies innings with six, taking the total to 142-7 after 20 overs.

Mustafiz was looking good in his first three overs but in the last over he suffered heavy damage and ended up with a bowling figure of 4-0-43-2.

Shakib Al Hasan was wicketless, he ended with 4-0-28-0 but the key-bowler was Mahedi who took two wickets for 27 runs but his dropped catch cost Bangladesh dearly.