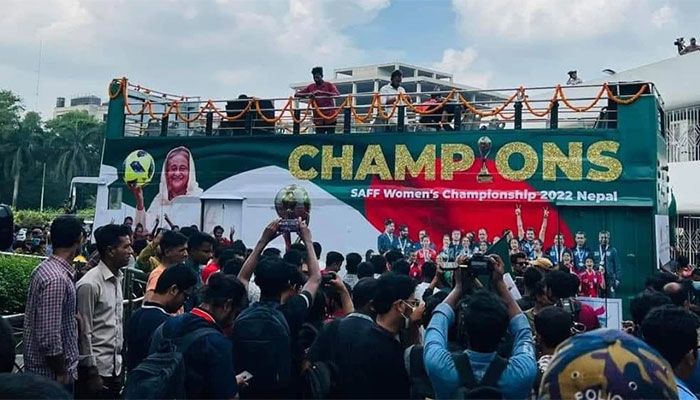 Before the flight arrived in Dhaka, thousands of supporters arrived in groups and waited outside Hazrat Shahjalal International Airport. They were shouting slogans, congratulating the girls.

Bangladesh beat Maldives, Pakistan, India, and Nepal on their way to the ultimate victory. Bangladesh scored 23 goals in the event and conceded only one in the final, reports UNB.

Krishna Rani Sarkar scored twice and Shamsunnahar scored the other goal. Sabina Akter led the team on their best journey so far.

Ahead of the final, Sanjida Akter, a member of Bangladesh’s glorious football team, said they might not get an opendeck bus to celebrate the win, still, they are committed to winning the tournament.

Her post became viral on social media, and subsequently, BRTC decided to prepare an open-deck bus for them. The bus is decorated with images of the footballers along with a big image of Prime Minister Sheikh Hasina holding a football.

The bus will carry the champions to the Bangladesh Football Federation headquarters from the airport. No team has received this kind of grand reception in Bangladesh in the recent past.

This team has been impressive for years. And now, they delivered the best performance so far.