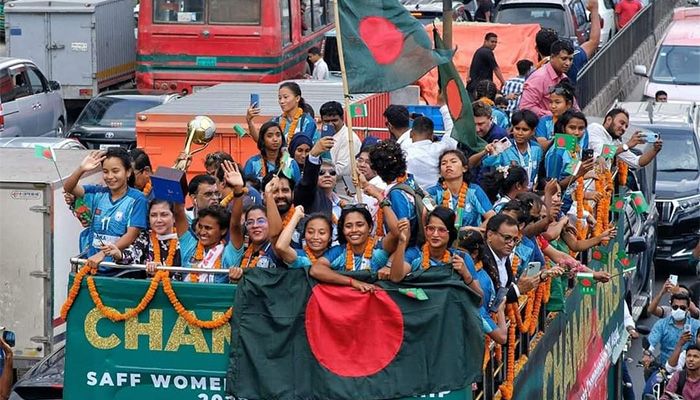 ﻿The whole nation is flooded with joy and ecstasy as the SAFF Women's Championship-winning Bangladesh Women’s football team has returned home. Many people and organisations have come forward to reward the girls who gifted the nation one of its finest moments in football.

The Bangladesh Cricket Board (BCB), earlier in the day, announced a reward of BDT 50 lakh for the champion girls. Vice president of the Bangladesh Football Federation (BFF) Ataur Rahman Manik, also the chairman of Toma Group, told the media a few hours ago that he has allocated BDT 50 lakh as a reward for the SAFF champions.

Sharmin Salam, wife of BFF senior vice-president Salam Murshedy and chairman of Envoy Group, now has announced a reward of BDT 50 lakh for the footballers.

"We are very happy and proud. The whole nation is celebrating [the success]. They are coming to the BFF house and it's been telecast live. She watched that and made the decision [of rewarding the team]," Murshedy said.

There is a press conference scheduled after the open-deck bus carrying the team reaches the BFF house.