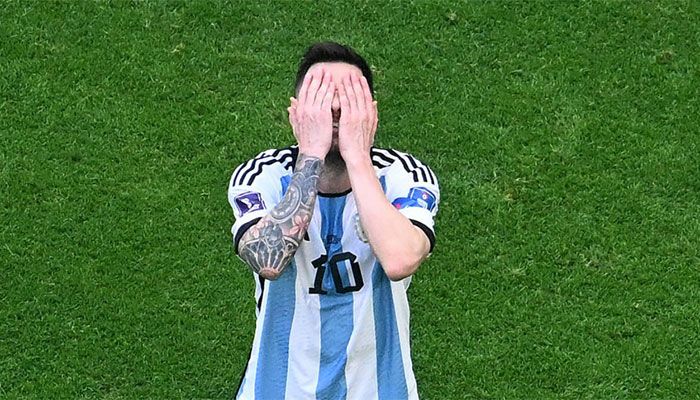 Few experiences can compare to watching a World Cup in Brazil: the borderline-obsessive football passion; the explosion of pride around the national team. And the schadenfreude when rivals Argentina lose, reports AFP.

The latter was on full display Tuesday when Argentina, the neighbors Brazilians love to hate, opened their highly anticipated campaign in Qatar by suffering one of the biggest upsets in World Cup history, a 2-1 loss to 51st-ranked Saudi Arabia.

The result was met with mirth in Brazil, whose beloved "Selecao" lost the 2021 Copa America final at home to their continental rivals.

"Argentina" soon became the top trending topic on Twitter in Brazil -- largely driven by mockery from the sort of fans who openly admit their second-favorite World Cup pleasure is seeing Lionel Messi and team lose.

"There are three things that bring joy to any Brazilian," tweeted one wag.

A group of Brazil fans pose with a replica of the World Cup trophy at Flag Plaza, in Doha on Tuesday. PHOTO: AFP

Another tweeted a picture of himself grinning happily in a yellow-and-green Brazil jersey, with the words: "Don't cry for me Argentina."

Some Brazilians reinvented the Argentine flag, replacing the sun in the center with a yellow "sobbing" emoji.

Others were inspired to hatch new definitions of "schadenfreude," the German word often translated as pleasure derived from another person's misfortune.

"Does SCHADENFREUDE mean 'Argentina got screwed' in German?" wrote one social media wit.

Another strand of mockery employed Brazilians' own lingo -- the word "zebra," which means upset.

"A 'zebra' at the World Cup is great, but a 'zebra' with Argentina IS SO INCREDIBLY GREAT," said one tweet.

"Argentina lost their invincibility in their World Cup opener in a 'zebra.' If that's not an excellent morning for any Brazilian football fan, I don't know what is!" said another.

But others in Brazil -- arguably the only country more often cited as tournament favorites than Argentina -- were all too aware that what goes around comes around.

"Let's calm down. Brazil play tomorrow, and they're favorites!" said one, as Neymar and team prepared to make their debut Thursday against Serbia.

Then, there was the unmentionable memory of the Brazilians' own not-so-long-ago humiliation: the five-time champions' 7-1 loss to Germany at home in the 2014 World Cup semi-finals.

"Argentina's loss may have been a big 'zebra,' but unfortunately for us, better not to even remember our greatest shame, right?" tweeted one.