Murray, Djokovic to Defy Aches And Pains at Australian Open 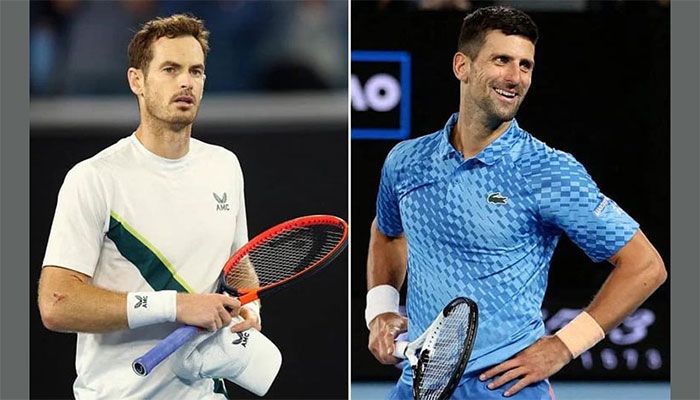 Andy Murray and Novak Djokovic will have to rev their bodies into action when both attempt to reach the fourth round of the Australian Open on Saturday.

It remains to be seen how much the 35-year-old Murray has left in the tank after he made round three by winning a five-set marathon which ended at 4:05 am on Friday, reports AFP.

The unseeded former world number one, who also played five sets in his opener at Melbourne Park, will need to defy tiredness and his metal hip against 24th seed Roberto Bautista Agut.

The three-time Grand Slam champion Murray, whose career looked over a few years ago because of his hip injury, took five hours and 45 minutes to defeat Australia's Thanasi Kokkinakis.

Murray was back at Melbourne Park practising just eight hours after his late night, and the 66th-ranked Briton will need all his trademark battling qualities against his Spanish opponent.

Murray's old rival Djokovic is clear favourite to win the Australian Open for a record-tying 22nd Grand Slam, but there are concerns about his left hamstring.

Following a four-set victory over French qualifier Enzo Couacaud on Thursday, the 35-year-old admitted he cannot practise between matches.

He needed a medical timeout and had heavy strapping around his thigh.

"I am worried, I have reason to be worried," Djokovic said of an injury he has been carrying since before coming to Melbourne.

"My situation with my injury is not ideal... I have to take it day by day.

"I'm not practising in the days between because I'm trying to give myself more time for my leg to be in somewhat more of an ideal state."

With defending champion Rafael Nadal and last year's beaten finalist Daniil Medvedev both out, plus world number one Carlos Alcaraz missing with injury, the title is Djokovic's to lose.

Aryna Sabalenka and Caroline Garcia headline the women's matches on day six of the first major of the year.

France's fourth seed Garcia should have too much for unseeded Laura Siegemund of Germany.

Hard-hitting Belarusian Sabalenka, the fifth seed who has looked imperious so far, faces a test in the form of 26th seed Elise Mertens.

She goes up against unseeded Italian Camila Giorgi.