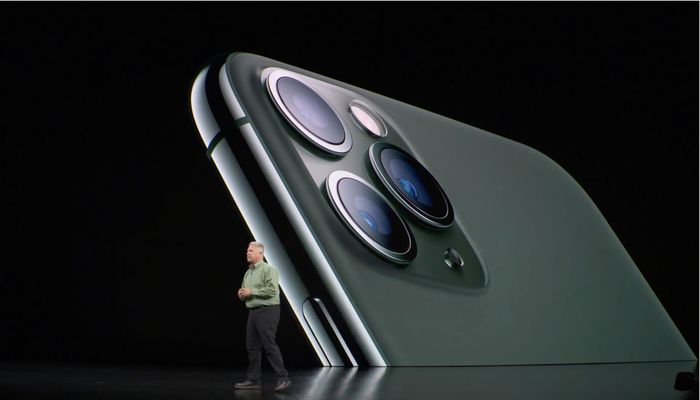 Apple’s triple-camera iPhone is real and it’s the first phone the company has dubbed “Pro.”

The bizarre-looking camera is the real star of the release. There are three 12-megapixel lenses with varying fields-of-view — a telephoto, a wide and an ultra-wide lens. The variety of lenses makes for a very strange nodule on the rear of the phone, but the shots Apple detailed in its keynote highlighted the level of detail that the new combination camera can bring when you switch between the lenses.

There wasn’t much said about the front-facing camera system, but Apple did detail that Face ID will now detect your face at wider angles. The phones will continue to shoot 4K HDR footage.

Apple has shifted to a three-year redesign cycle, and in its third year, not much has changed with the iPhone 11 Pro looks-wise (beyond the camera square). In terms of looks, there’s a new “midnight green” textured matte finish, which actually looks quite nice among the more classic hues.

The new Pro devices ship with the company’s new A13 bionic chip, which has been optimized for high-intensity, low-power computing. The gains mean more usage between charges; the iPhone 11 Pro gets four more hours of usage per charge than the iPhone XS and the iPhone 11 Pro Max (what a mouthful) gets five hours more. The new phones ship with an 18-watt charger so that you can replenish your battery quickly… you’re probably going to want to dump those 5W charger blocks.

The new naming scheme doesn’t seem to denote a widening gap between the new phones Apple has released. The differences between the iPhone 11 Pro and iPhone 11 seem similar to the iPhone XR/XS relationship, the emphasis seems to be on boosting sales of the cheaper LCD iPhone while not making people feel like they’re buying the bargain iPhone.

Pre-orders for the iPhone 11 Pro go live this Friday and the phones ship on September 20.