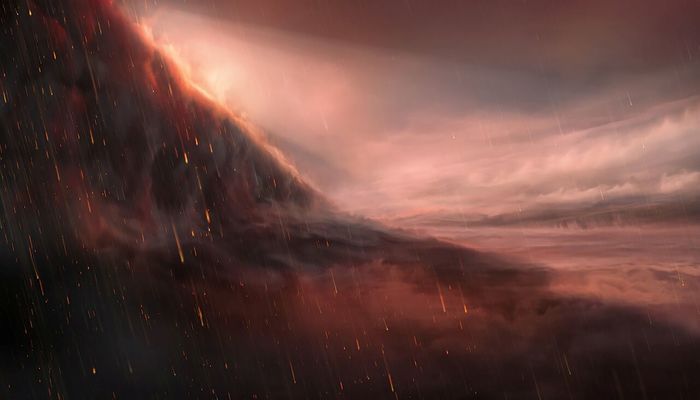 ﻿Scientists have detected an exotic planet in another solar system where the weather forecast is always dire - a 100% chance of the most outrageous rain imaginable, with droplets of scaldingly hot liquid iron.

The researchers said yesterday they used the planet-hunting ESPRESSO instrument on the European Southern Observatory's Very Large Telescope in Chile to observe a planet called WASP-76b located about 640 light-years from Earth. It is near twice the size of Jupiter, our solar system's largest planet.

Planets discovered outside our solar system are called exoplanets, and WASP-76b is one of the most extreme in terms of climate and chemistry. It is a member of a family of exoplanets spotted in recent years called "ultra-hot" gas giants.

One side of the planet, it is permanently day, and the world is hit by temperatures of up to 2400°C. That leads the metals on the surface to evaporate. But that vaporized metal is then carried by strong winds over to the other side of the planet, where it is permanently night and much cooler. There, the iron vapor is cooled and condenses into droplets of iron that then drop over the surface.

"One could say that this planet gets rainy in the evening, except it rains iron," says the University of Geneva astronomer David Ehrenreich, lead author of the study published in the journal Nature.

WASP-76b illustrates the exotic nature of some exoplanets and shows that much remains to be learned about alien planetary systems.

"The extreme atmospheric conditions met in WASP-76b and its siblings, other 'ultra-hot' gas giants, are not found anywhere in our solar system and would be very difficult to reproduce in a lab," Ehrenreich said. "Therefore, these exotic objects are unique laboratories to crash-test our climate models and understand the most extreme forms of atmospheric evolution."

WASP-76b appears to be the only planet orbiting its star. While its diameter of approximately 266,000km is about 1.9 times bigger than Jupiter, WASP-76b is actually slightly less massive than Jupiter. This may be the result of perpetually being heated up by the star or never having the chance to cool down and shrink after the planet's formation because of its position so close to the star.