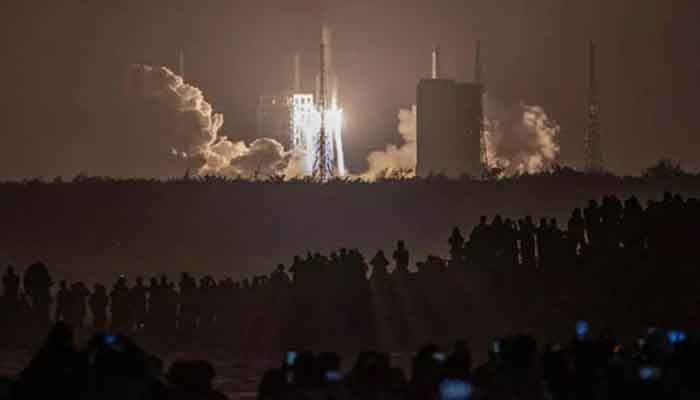 China launched an unmanned spacecraft on Tuesday to carry back lunar rocks, the first attempt in four decades by any nation to collect samples from the Moon.

The official Xinhua news agency announced that a Long March 5 rocket carrying the Chang'e-5 probe, named after the legendary Chinese moon goddess, blasted off from the Wenchang Space Center on the southern island province of Hainan at 4:30 am (2030 GMT Monday).

With expectations of getting a crewed space station by 2022 and potentially sending humans to the Moon, Beijing is pouring billions into its military-run space programme.

The purpose of the project is to shovel lunar rocks and soil to help researchers learn about the history, formation and volcanic activity of the Moon on its surface.

State TV footage of the launch showed the rocket blasting off into a dark night, with huge clouds of smoke billowing out underneath.

Crowds watched the launch from the beach on the tropical Chinese island, holding mobile phones aloft to film as the rocket blasted into the sky.

The original mission, planned for 2017, was delayed due to an engine failure in the Long March 5 rocket.

If successful, China will be only the third country to have retrieved samples from the Moon, following the United States and the Soviet Union in the 1960s and 1970s.

The Chinese probe will collect two kilograms (4.5 pounds) of surface material in a previously unexplored area known as Oceanus Procellarum — or “Ocean of Storms” — which consist of a vast lava plain, according to the science journal Nature.

The probe is expected to land in late November and collect material during one lunar day — equivalent to around 14 Earth days.

The samples will then be returned to Earth in a capsule programmed to land in northern China’s Inner Mongolia region in early December, according to US space agency NASA.

The mission is technically challenging and involves several innovations not seen during previous attempts at collecting moon rocks, said Jonathan McDowell, an astronomer at the Harvard-Smithsonian Center for Astrophysics.

“The US never did a robotic sample return. The Soviet one was very limited and could only land at certain restricted spots,” McDowell told AFP.

“China’s system will be the most flexible and capable robotic sample return system yet.”

In January 2019, in a global first that raised Beijing's hopes to become a space superpower, a Chinese lunar rover landed on the far side of the Moon.

"After the Yutu ("Jade Rabbit") rover launch in 2013, it was the second Chinese probe to land on the Moon.

Chen Lan, an independent analyst at GoTaikonauts, which specialises in China’s space programme, said the latest launch was a chance for China to develop technology that would be used in a future manned space landing and described it as “one of the most risky missions launched by China”.

“The Chang’e 5 sample return mission is of course more complicated and difficult than all previous Chinese lunar missions, as it not only needs to take off from the lunar surface and to re-enter the Earth atmosphere in higher speed, but also to perform lunar orbit rendezvous and docking operations in lunar orbit,” Chen told AFP.

The latest Chang'e-5 probe is one of Beijing's many ambitious goals, including the construction of a super-powerful rocket capable of delivering payloads heavier than those that can handle NASA and private rocket company SpaceX, a lunar base, a permanently crewed space station, and a Mars rover.