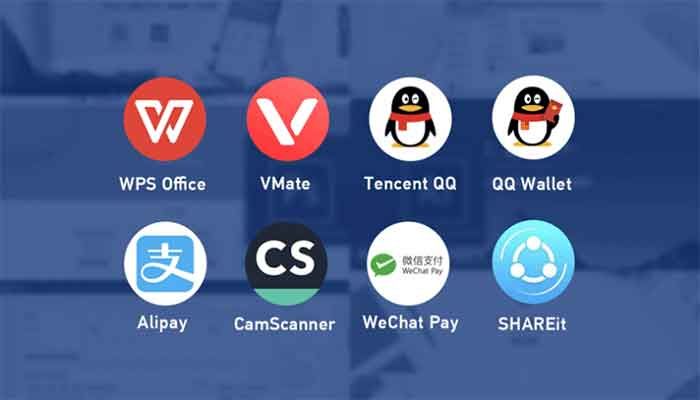 An executive order banning transactions with eight Chinese apps has been signed by US President Donald Trump.

The apps include Alipay, as well as QQ Wallet and WeChat pay, a common payment platform.

The order, which takes effect in 45 days, says that because they are a threat to US national security, the apps are being banned.

It flags the possibility that the apps could be used to track and build dossiers on US federal employees.

Tencent QQ, CamScanner, SHAREit, VMate and WPS Office are also included within the order, which only kicks in after Mr Trump has left office.

"The United States must take aggressive action against those who develop or control Chinese connected software applications to protect our national security," the order said.

The Trump administration has ratcheted up pressure on Chinese companies in its final months in office, including those it considers a national security risk.

President Trump has signed executive orders against a range of Chinese firms arguing they could share data with the Chinese government.

Chinese social media app TikTok and telecoms giant Huawei have been among the casualties of Washington's crackdown.

The administration also restricted a number of Chinese and Russian companies with alleged military ties from buying sensitive US goods and technology.

China has consistently denied claims that these firms share their data with the Chinese government and has responded by imposing its own export laws restricting the export of military technology.

In August, the US ordered ByteDance, the owner of social media app TikTok, to either shut down or sell off its US assets.

Despite missing a deadline to complete the sale, the US is yet to shut down the app and negotiations continue over its future.

The latest ban comes as the White House quietly pushed the New York Stock Exchange (NYSE) to consider a second U-turn on its decision to delist three Chinese telecoms giants.

Last week the NYSE announced it would delist the China Mobile, China Telecom and China Unicom in line with another executive order.

On Monday, however, the NYSE reversed that decision, announcing it had decided not to delist the three companies after further consultation with US regulators.

The NYSE made the decision based on ambiguity about whether the securities were actually covered by the order.

However, the exchange has come under pressure over its decision.

The US Treasury Secretary Steven Mnuchin called the NYSE President Stacey Cunningham to tell her he disagrees with the decision, according to Reuters.

Republican Senator and China hardliner Marco Rubio has also spoken out, saying that the NYSE's refusal to delist the companies was an "outrageous effort" to undermine the President's executive order.

The NYSE is owned by Atlanta-based Intercontinental Exchange (ICE), which is run by billionaire Jeffrey Sprecher.

His wife Kelly Loeffler is one of two Republican senators facing run-off elections on Tuesday in Georgia.