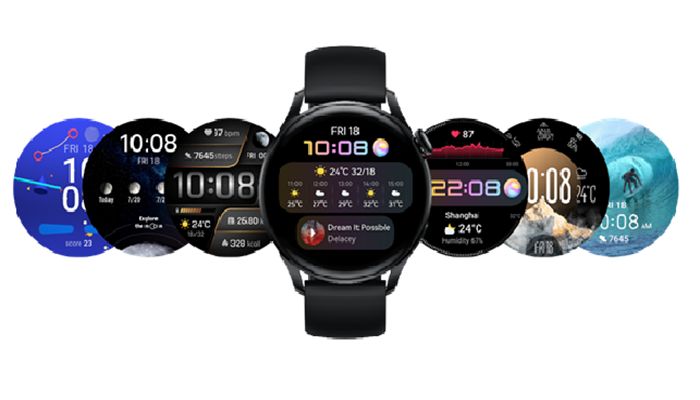 ﻿Huawei launched a range of smartphones, smartwatches, and tablets powered by its new HarmonyOS 2 operating system recently, including a new version of the HUAWEI Mate 40 Series and HUAWEI Mate X2, the HUAWEI WATCH 3 Series, and the HUAWEI MatePad Pro.

At the launching event in China, Huawei also released the HUAWEI FreeBuds 4, its next-generation open-fit Active Noise Cancellation (ANC) wireless Bluetooth earbuds, and two high-end monitors, the HUAWEI MateView and the HUAWEI MateView GT. The company took this opportunity to announce that roughly 100 other Huawei devices – including both smartphones and tablets – will be upgraded to run on HarmonyOS 2, giving consumers access to a seamless intelligent experience across multiple devices in all different types of scenarios.

Huawei's brand-new flagship smartwatch, the HUAWEI WATCH 3 Series, features a curved glass screen and 316L stainless steel case, comes with the brand-new 3D rotating crown that senses different levels of pressure and provides haptic feedback in response to user input, making the watch both comfortable to wear and easy to operate. The HUAWEI WATCH 3 Series also allows making and receiving phone calls and listening to music using the same phone number and data plan as smartphone. This HarmonyOS 2 based watch allows it to integrate seamlessly with Huawei smartphones to serve as a multifunctional guide for travel, professional fitness and health manager.

The second-generation HUAWEI M-Pencil was unveiled together with the HUAWEI MatePad Pro. The new smart pen features a new platinum-coated nib for high-precision handwriting and ultra-low latency, accurately differentiating between 4,096 levels of force. The HUAWEI M-Pencil supports FreeScript, which converts handwriting in any input box into digital text in real time.

Multi-device interaction with HarmonyOS makes working across multiple devices as simple as controlling one. The new Control Panel supports simple and intuitive connections through a drag-and-integrate feature that allows users to freely connect the devices they want based on specific scenarios.

HarmonyOS 2's new Task Center allows apps to travel between different devices at will without installing them on each and every one, so that all functions and services are available whenever and wherever they're needed.

HUAWEI HiLink has been upgraded to HarmonyOS Connect to equip more non-Huawei devices with smart features. Smart home devices can be connected to mobile phone with a single tap. Like a tap on phone against a Midea oven that supports HarmonyOS Connect and select a recipe to start preparing meal instantly. Keep leftovers safe for longer with Haier refrigerators that automatically adjust their temperature based on the type of food being storing.

HarmonyOS 2 runs even more smoothly than the last generation of EMUI. A HarmonyOS 2 phone can maintain read/write speeds similar to those of a new phone after 36 months of use, even with very little storage still available on the device.

HarmonyOS 2 keeps opened apps running in the background so that tasks are always available where those were left off. Users can return to the last action or page on a given app even if they have dozens of other apps open. After upgrading to HarmonyOS 2, the HUAWEI Mate 40 Pro can run Game for Peace for 5.1 hours straight.

"We are surrounded by more and more smart devices these days, and are now in a world where all things are connected," said Richard Yu, Executive Director and CEO of Huawei's Consumer Business Group. "Every single one of us is a part of this fully connected world, as is every device. We look forward to working with more partners and developers to build a thriving HarmonyOS ecosystem and provide even better experiences, products, and services to our customers the world over."

As a next-generation operating system for smart devices, HarmonyOS provides a common language for different kinds of devices to connect and collaborate, providing users with a more convenient, smooth, and secure experience. It uses distributed technology to meet the varied needs of all types of different devices with a single system, enabling flexible deployment as needed. HarmonyOS also combines previously independent devices into a cohesive and holistic Super Device that integrates all hardware and resources to freely leverage the capabilities of its component devices based on the user's real-time needs. For developers, HarmonyOS allows cross-platform development and cross-device deployment of apps, making the development of apps across devices easier than ever before.

To give more consumers the opportunity to experience the convenience, seamlessness, and security of HarmonyOS across all scenarios, nearly 100 Huawei devices are set to receive the HarmonyOS 2 upgrade in China, including the HUAWEI Mate 40 series, Mate 30 series, P40 series, Mate X2, nova 8 series, and MatePad Pro series. Users who want to try out the new OS sooner can submit an application at the Huawei Club or on the My Huawei app, or sign up for the HarmonyOS Experience Officer Program in any of Huawei's 66 offline experience stores in China.