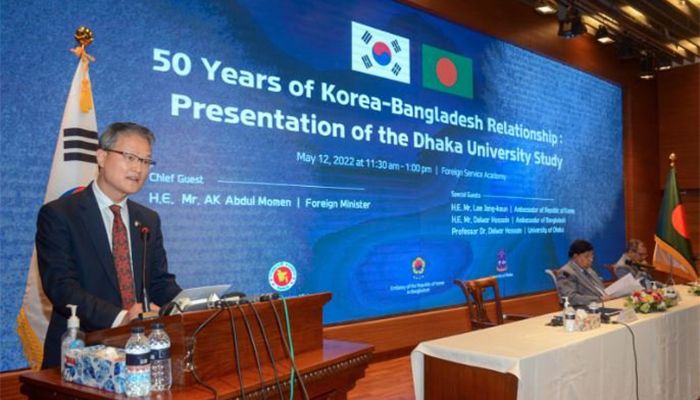 ﻿South Korean Ambassador to Bangladesh Lee Jang-Keun today said his country is becoming a more and more attractive partner to Bangladesh for "reducing or avoiding" the current global geopolitical risk.

"(Korean) Companies have realized the risks from geopolitical confrontations and the necessity of diversifying their investment and partners ... in this situation Bangladesh is increasingly becoming an attractive partner for the Korean companies," he said.

The envoy was addressing a seminar titled, "50 years of Korea-Bangladesh Relationship" at Foreign Service Academy that showcased and discussed the study of Dhaka University (DU) on the past, present, and future of the Korea-Bangladesh relationship in various areas of cooperation.

Lee said the current geopolitical situation around the world is posing grave challenges to all, not only internationally but also regionally and bilaterally.

The consequent disruptions in the global supply chain have put many countries in difficulty including Korea and Bangladesh while all countries have to cooperate together more than before to get over the unprecedented current geopolitical challenges, he said.

"I believe that to some extent the current geopolitical situation is creating more opportunities than challenges to Korea and Bangladesh for closer collaboration," he added.

More than that, the envoy said, Korea and Bangladesh have many commonalities that could make us natural partners.

The envoy said Korea and Bangladesh also share common values; values of democracy, the market economy, and human rights which would form a solid basis of cooperation in the future.

Mentioning that Korean new president Yoon Suk Yeol was sworn in just three days ago, the ambassador said the new administration in Korea would offer a fresh opportunity for Dhaka and Seoul to open a new chapter of comprehensive partnership towards the next five decades.

"I would like to assure you of my own commitment to make my utmost to this end and hope everybody to join in our joint journey towards better and promising future relations," he said adding that Korea and Bangladesh could chart together a new course of ties in the coming years and decades.