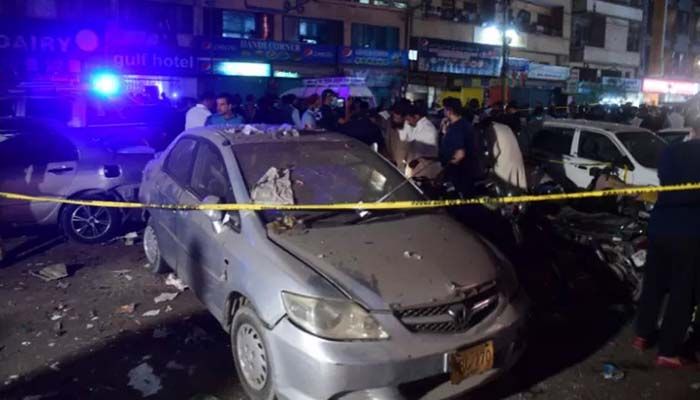 Security officials inspect the site after the explosion of a bomb, in Karachi on May 12, 2022 || AFP Photo: Collected

One person was killed and 12 injured in a bomb blast late Thursday in Karachi, police said, in the second attack by separatist militants to hit Pakistan's most populous city in recent weeks, reports AFP.

The explosion in the Saddar neighbourhood was claimed by the Sindhudesh Revolutionary Army (SRA) -- a dissident faction fighting for independence in the province of Sindh.

In a statement released on Telegram the SRA said it planted a "remote control bomb" targeting a coastguard vehicle and vowed to "continue its resistance struggle till complete freedom".

The bomb detonated around 11:00pm (1800 GMT) but police said one "passerby" was the only person slain, while a coastguard vehicle was among "several" damaged.

"Initial investigation suggested that the explosive material was planted in a motorcycle that was parked near a trash bin," said local police station house officer Sajjad Khan.

On Friday morning patients were still being treated for injuries from ball bearings -- which are packed inside bombs to magnify the damage -- said Jinnah Hospital medical superintendent Shahid Rasool.

Nine of the injured remained in hospital, while three had already been discharged, he said.

The Baloch Liberation Army (BLA) -- a group fighting for independence in Pakistan's largest and most impoverished province, Balochistan -- claimed responsibility for the April 26 strike.

China has made massive energy and infrastructure investments in Balochistan under a $54 billion scheme known as the China-Pakistan Economic Corridor.

However, the programme has put Chinese citizens in the cross hairs of Baloch separatists, who say local residents do not see their fair share of riches from natural resources in the region.

More widely, Pakistan has been witnessing an uptick in militant attacks.

The Pakistan Institute for Conflict and Security Studies said assaults rose by 24 per cent between March and April.

Since the Taliban returned to power in Afghanistan, Islamabad has increasingly complained of attacks being staged across the porous border with the neighbouring nation.