Clashes in Indian Kashmir after Death of Minority Hindu 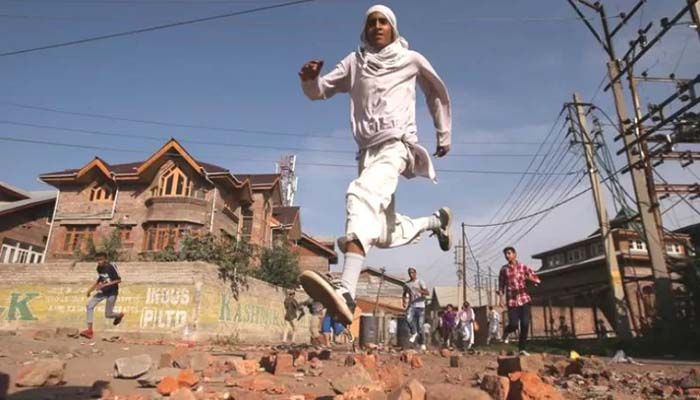 Kashmiris run for cover as Indian security forces (not pictured) fire teargas shells during clashes, after scrapping of the special constitutional status for Kashmir by the Indian government, in Srinagar, September 6, 2019 || Reuters Photo: Collected

Police fired tear gas and used batons Friday in Indian-administered Kashmir to break up a protest against the killing of a minority Hindu by suspected separatist rebels, reports AFP.

Clashes are frequent in the divided territory, which is also claimed by Pakistan, but the police operation was the first in the Muslim-majority region against the local Hindu population, known as Pandits.

On Thursday two gunmen shot and killed Rahul Bhat, a government employee, inside an office complex in Budgam where he worked, said police, who blamed rebels fighting Indian rule in Kashmir.

"If this kind of killing can happen inside a government office, what security is Modi's government talking about for us?" one angry protester who declined to be named told AFP by phone.

Police were deployed when the demonstrators poured onto the main road and attempted to march toward the airport. No injuries were reported.

Small groups of Hindus also staged protests at three other locations in Kashmir on Thursday night.

Many political leaders in the region, including Muslims, issued statements condemning the "barbaric" killing of Bhat. Tens of thousands of Hindu families fled the Kashmir Valley in the early 1990s when an armed rebellion erupted against Indian rule in the territory.

Most of them still live outside their homeland, scattered across Indian cities.

Bhat lived in a protected rehabilitation settlement for thousands of Pandits given government jobs in recent years under a plan to help resettle some of those who fled.

Kashmir has been divided between India and Pakistan since their independence in 1947 and the rivals claim the territory in full.

Rebel groups have waged an insurgency for over three decades demanding independence for Kashmir or its merger with Pakistan.

The conflict has left tens of thousands of civilians, soldiers and rebels dead.

In 2019, Modi's government annulled the region's partial autonomy, allowing all Indians for the first time to buy land in Kashmir and cancelling privileges reserved for its permanent residents.