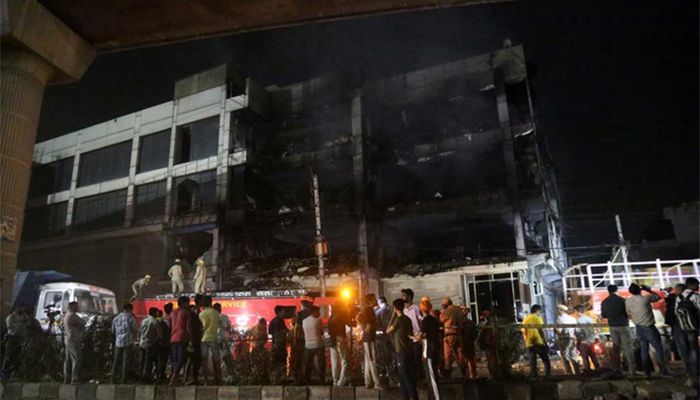 Rescue members and onlookers stand as fire fighters douse a fire that broke out at a commercial building in Delhi's western suburb May 13, 2022 || Photo: Reuters

﻿﻿At least 27 people died on Friday in a fire that broke out in a four-storey building near a railway station in city state Delhi's western suburb, police said in a statement.

Television footage showed smoke billowing out of the windows of the building, with firefighters helping those trapped on the upper floors to escape as hundreds watched.

Police broke windows of the building to help rescue those insides "and got the injured admitted in the hospital," a police statement said, adding that 12 injured were admitted to a local hospital.

The fire broke out on the first floor of the building that houses the office of a surveillance camera manufacturing company, police said.

The building, which rents out office space, is located near a railway station in western Delhi suburb Mundka and is about 23 kilometres (14 miles) away from the national capital New Delhi.

Over 50 people have been rescued and firefighters are working to control the fire, the police said, adding that ambulances were also on site.

"More than 30 fire tenders of the fire brigade were pressed into service to control the fire," the police said._Reuters