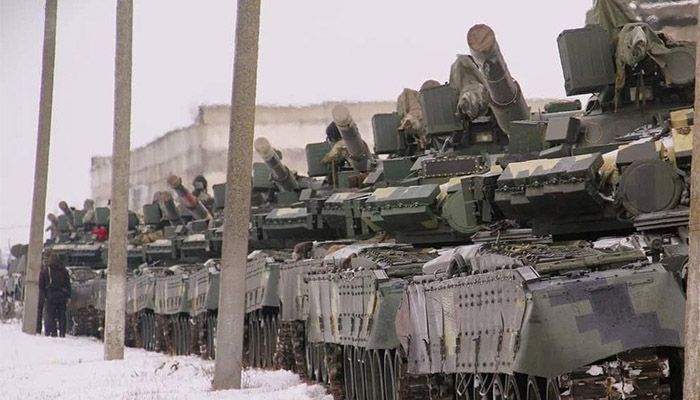 Fighting between Russian and Ukrainian troops continued along the long front in the Donbas with minor gains on both sides || Photo: AFP

﻿Europe pledged another half-billion-dollar in military support for Kyiv on Friday as Sweden and Finland's moves toward joining NATO hit multiple hurdles.

Moscow said it would cut off electricity to Helsinki, and the president of Turkey -- a member of the Atlantic alliance whose approval is required to expand it -- expressed opposition to the Scandinavian countries becoming part of NATO.

Fighting between Russian and Ukrainian troops continued along the long front in the Donbas with minor gains on both sides, and Ukrainian fighters under siege in a Mariupol steelworks pleaded for help.

US Secretary of Defense Lloyd Austin and Russian Defense Minister Sergei Shoigu meanwhile spoke directly for the first time since before the war began.

But few details emerged from their one-hour call beyond Austin urging Shoigu to implement an immediate ceasefire, according to the Pentagon.

"The call itself didn't specifically solve any acute issues or lead to a direct change in what the Russians are doing or what they are saying," a senior US defense official said.

One day after leaders in Helsinki declared their nation must apply to join NATO "without delay," Russian state energy group Inter RAO said it would suspend electricity supplies to Finland beginning Saturday.

Inter RAO's subsidiary in the Nordic region blamed the suspension on not having received payment for electricity sold in May.

Noting that only 10 percent of the country's electricity comes from neighbouring Russia, the Finnish electricity network operator said it would be able to make do without Russian electricity.

"We're prepared for this and it won't be difficult. We can make do with a bit more imports from Sweden and Norway," said Timo Kaukonen, manager for operational planning at Finnish power firm Fingrid.

But the cutoff underscored the challenges as both Finland and Sweden prepare for the major geopolitical shift that their joining NATO would represent, after years of proudly staying out of the alliance.

US President Joe Biden spoke with Swedish Prime Minister Magdalena Andersson and Finnish President Sauli Niinisto Friday on the NATO plan, and the White House said it was "working to clarify" Erdogan's stance on the issue.

The Swedish and Finnish foreign ministers planned to meet their Turkish counterpart in Berlin on Saturday to discuss their potential NATO bids.

In a speech Friday evening, Ukrainian President Volodymyr Zelensky expressed gratitude for Ukraine's partners "strengthening sanctions against Russia and increasing military and financial assistance to us."

"This is the only recipe for defending freedom during Russia's invasion. It is not just expenses for Western countries. It is not about accounting. It's about the future," he said.

A captured Russian soldier appeared in a court in Kyiv on Friday facing war crimes and murder charges.

Vadim Shishimarin, 21, allegedly gunned down an unarmed 62-year-old civilian who had witnessed a carjacking by fleeing Russian troops.

The trial marks a significant moment in Ukraine, where accounts of murder, torture and rape by Russian forces are multiplying.

In eastern Ukraine, witnesses in the village of Stepanki, near the regional capital of Kharkiv, accused the Russians of shelling a home, killing several people.

They said six people who lived in the house were drinking tea in the courtyard when a tank approached.

"They started going into the house to hide," said Olga Karpenko, 52. The tank took aim and fired at them as they entered the house.

"Four people died, two were injured. My daughter died from a shrapnel wound in the back of her head," Karpenko said.

- Call for help from Mariupol -

Russian forces continued to shell the Azovstal steel plant in Mariupol, where around 1,000 Ukrainian fighters remained under siege.

From inside the plant, Sviatoslav Palamar, one of the leaders of the Ukrainian Azov regiment, told the online Kyiv Security Forum that there were 600 wounded there and pleaded for help to evacuate them.

"We continue to defend ourselves, and we shall not surrender," he said.

He urged the United States and other allies to find a way to help evacuate the wounded.

"If there is any opportunity, please use it," he said._AFP