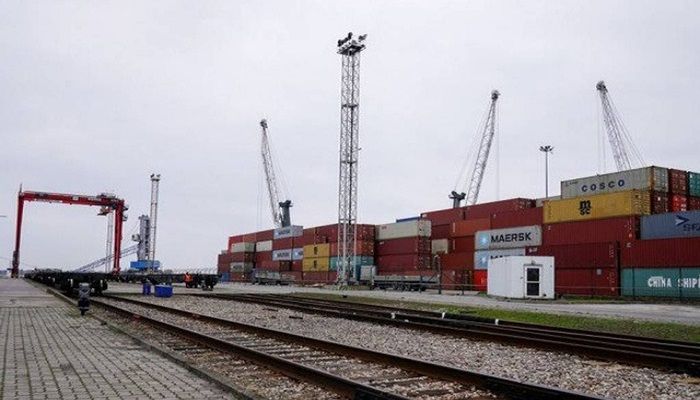 A view shows railway tracks at a commercial port in the Baltic Sea town of Baltiysk in the Kaliningrad region, Russia October 28, 2021 || REUTERS

﻿﻿Russia threatened on Tuesday to punish Lithuania with measures that would have a "serious negative impact" for blocking some shipments by rail to Moscow's Baltic Sea enclave of Kaliningrad, the latest dispute over sanctions imposed over war in Ukraine.

Within Ukraine, the battle for the eastern Donbas region has become a brutal war of attrition, with Russia concentrating its overwhelming firepower on a Ukrainian-held pocket of the region that Moscow claims on behalf of its separatist proxies.

The proxies said on Tuesday they were advancing towards the town of Lysychansk, now Ukraine's main bastion in the area of heaviest fighting after most of the neighbouring city of Sievierodonetsk fell under Russian control.

Ukraine, its forces and weaponry dwarfed by Russia's, has begged the West to send more and better artillery. Defence Minister Oleksiy Reznikov announced on Tuesday the arrival of powerful German self-propelled howitzers.

Blaming Western sanctions, Russia has started pumping reduced volumes of gas to Europe via Ukraine. German Economy Minister Robert Habeck said the reduced flows amounted to an economic attack on Germany that "cannot be allowed to succeed". Berlin unveiled details of a new auction system aimed at incentivising industry to use less gas.

Diplomatic attention has turned towards Russia's Kaliningrad enclave, a Baltic Sea port and surrounding countryside that are home to nearly a million Russians, connected to the rest of Russia by a rail link through EU- and NATO-member Lithuania.

Lithuania has shut the route for transport of steel and other ferrous metals, which it says it is required to do under EU sanctions that took effect on Saturday.

Russian officials say other basic goods have been blocked as well. Video footage from the enclave showed some panic buying over the weekend at shops selling construction materials.-REUTERS