US-China Ties on a Precipice after Pelosi Visit to Taiwan 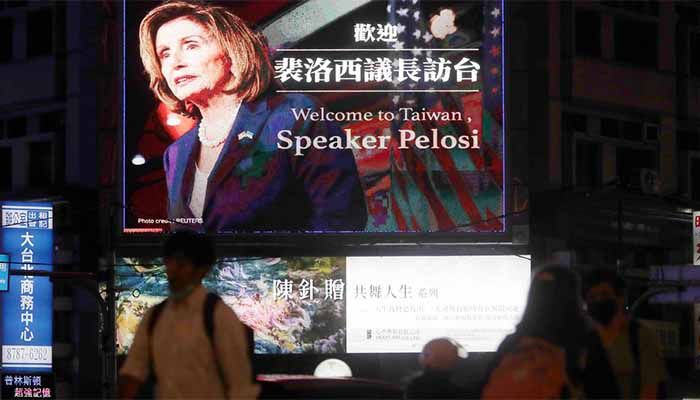 People walk past a billboard welcoming U.S. House Speaker Nancy Pelosi, in Taipei, Taiwan, Wednesday, Aug 3, 2022. Pelosi arrived in Taiwan late Tuesday, becoming the highest-ranking American official in 25 years to visit the self-ruled island claimed by China, which quickly announced that it would conduct military maneuvers in retaliation for her presence || AP Photo

﻿U.S.-China relations are teetering on a precipice after House Speaker Nancy Pelosi’s visit to Taiwan.

Pelosi received a rapturous welcome in Taipei and was applauded with strong bipartisan support in Washington, despite the Biden administration’s misgivings. But her trip has enraged Beijing and Chinese nationalists and will complicate already strained ties even after her departure.

Already, China is preparing new shows of force in the Taiwan Strait to make clear that its claims are non-negotiable on the island it regards as a renegade province. And, as the U.S. presses ahead with demonstrations of support for Taiwan, arms sales and diplomatic lobbying, the escalating tensions have raised the risks of military confrontation, intentional or not.

And the trip could further muddle Washington’s already complicated relationship with Beijing as the two sides wrest with differences over trade, the war in Ukraine, human rights and more.

Wary of the reaction from China, the Biden administration discouraged but did not prevent Pelosi from visiting Taiwan. It has taken pains to stress to Beijing that the House speaker is not a member of the executive branch and her visit represents no change in the U.S. “one-China” policy.

That was little comfort for Beijing. Pelosi, who is second in line to the U.S. presidency, was no ordinary visitor and was greeted almost like a head of state. Taiwan’s skyline lit up with a message of welcome, and she met with the biggest names on the island, including its president, senior legislators and prominent rights activists.

“What Pelosi has done is definitely not a defense and maintenance of democracy, but a provocation and violation of China’s sovereignty and territorial integrity,” Foreign Ministry spokesperson Hua Chunying said after her departure.

The timing of the visit may have added to the tensions. It came ahead of this year’s Chinese Communist Party’s Congress at which President Xi Jinping will try to further cement his power, using a hard line on Taiwan to blunt domestic criticism on COVID-19, the economy and other issues.

Summoned to the Foreign Ministry to hear China’s complaints, U.S. Ambassador Nicholas Burns insisted that the visit was nothing but routine. “The United States will not escalate and stands ready to work with China to prevent escalation altogether,” Burns said, according to the State Department.

The White House also said that Pelosi’s visit “doesn’t change anything” about the U.S. posture toward China and Taiwan. Press secretary Karine Jean-Pierre said the U.S. had expected the harsh reaction from China, even as she called it unwarranted.

“We are going to monitor, and we will manage what Beijing chooses to do,” she added.

Alarmed by the possibility of a new geo-strategic conflict at the same time the West sides with Ukraine in its resistance to Russia’s invasion, the U.S. has rallied allies to its side.

The foreign ministers of the Group of 7 industrialized democracies released a statement Wednesday essentially telling China — by the initials of its formal name, the People’s Republic of China — to calm down.

“It is normal and routine for legislators from our countries to travel internationally,” the G-7 ministers said. “The PRC’s escalatory response risks increasing tensions and destabilizing the region. We call on the PRC not to unilaterally change the status quo by force in the region, and to resolve cross-Strait differences by peaceful means.”

Still, that status quo — long identified as “strategic ambiguity” for the U.S. and quiet but determined Chinese opposition to any figment of Taiwanese independence — appears to be no longer tenable for either side.

“It’s getting harder and harder to agree on Taiwan for both Beijing and Washington,” said Jean-Pierre Cabestan, an emeritus professor at Hong Kong Baptist University.

In Taipei and the U.S. Congress, moves are afoot to clarify the ambiguity that has defined U.S. relations with Taiwan since the 1970s. The Senate Foreign Relations Committee will soon consider a bill that would strengthen relations, require the executive branch to do more to bring Taiwan into the international system and take more determined steps to help the island defend itself.