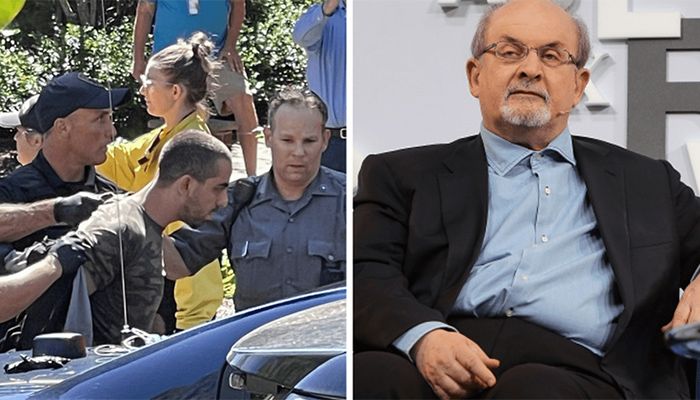 ﻿As writer Salman Rushdie battles for his life on ventilator support in a New York hospital, police on Friday identified the attacker as 24-year-old Hadi Matar from New Jersey.

Police said Rushdie,75, was stabbed in the neck and the abdomen. He was immediately administered emergency medical care. Rushdie was attending an event in Chautauqua Institution near Buffalo city when the attack took place. The India-born writer was immediately airlifted to a hospital. Health officials say the writer could lose an eye.

Who is Hadi Matar?

Reports say Matar ran onto the stage where Rushdie was seated and stabbed him repeatedly before he was subdued. Matar lives in Fairfield, New Jersey. New York police said Matar’s motive remained unclear.

Reports say police have begun searching Matar's residence in New Jersey with very little known about the suspect so far. Matar was taken down as members in the audience reacted to subdue him amid shock and confusion at the event. Reports claim Matar was dressed in black and was wearing a black mask.

Matar is currently in police custody and hasn't been charged yet as police continue their investigation. New York Police and FBI together are investigating the case. Reports claim Hadi Matar had sympathies towards Iran and reportedly had a Facebook page with a photo of Ayatollah Khomeini who had issued a Fatwa against the writer in 1989 after the book The Satanic Verses was published.

What is the controversy surrounding the Satanic Verses?

Iran's supreme leader Ayatollah Khomeini had issued a fatwa against Salman Rushdie in February 1989 after the book "The Satanic Verses" was published. Khomeini directed his supporters to kill the writer since the Iran leader claimed the book insulted Islam.

Khomeini had announced a $2.8-million bounty for killing Rushdie. The British government moved quickly to provide the Indian-origin writer with top-level security._Agencies