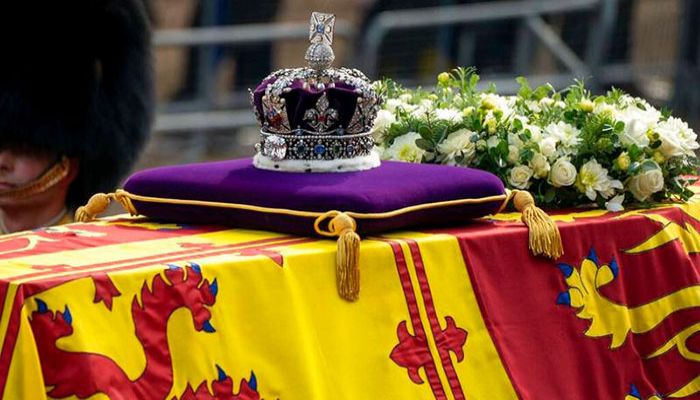 The state funeral of Queen Elizabeth II at London's Westminster Abbey on Monday will be the culmination of decades of meticulous planning, reports AFP.

Here is how the day will unfold:

The last time Westminster Abbey was used for a monarch's funeral was for King George II in 1760.

Since then, the preferred church has been St. George's Chapel at Windsor Castle but Elizabeth opted for a larger venue.

On the morning of the funeral, the lying in state -- begun at Westminster Hall in parliament on Wednesday -- will continue until 6:30 am (0530 GMT).

At 6:30 am, the doors will close in preparation for the transfer of the coffin to the nearby abbey.

Shortly after 10:35 am a bearer party will lift the coffin from the catafalque, a raised platform, and carry it to the state gun carriage which will be waiting outside the North Door of Westminster Hall.

The state gun carriage is a field gun carriage held by the Royal Navy since 1901, when it was withdrawn from active service for the funeral of Queen Victoria.

It was also used for the funerals of kings Edward VII, George V, the queen's father George VI, wartime prime minister Winston Churchill and Lord Louis Mountbatten, who was the last viceroy of British-ruled India.

The queen's eldest son and successor, King Charles III, will lead members of the royal family walking behind the coffin to the West Gate of Westminster Abbey, arriving at 10:52 am.

The funeral, conducted by the Dean of Westminster, David Hoyle, with Archbishop of Canterbury Justin Welby giving the sermon, will start at 11:00 am.

Towards the end of the service at around 11:55 am, the Last Post bugle call will sound, followed by a two-minute silence.

London Heathrow Airport said flights would be stopped into and out of the airport 15 minutes before and after the silence.

The service will close with the national anthem and a Lament, a musical expression of grief, at around noon.

Westminster Abbey can hold up to 2,200 people.

Those present in the congregation will include family members, Britain's Prime Minister Liz Truss, senior politicians, former premiers, and more than 100 kings, queens and heads of state and other VIPs.

Invitations are expected to be sent to representatives of all countries with which Britain has diplomatic relations.

The palace has not released a formal guest list.

Russia and Belarus have not been invited because of the war in Ukraine, diplomatic sources said this week.

Military-run Myanmar and isolated North Korea have also not been invited, with no attendance either by representatives from Syria, Venezuela or Taliban-run Afghanistan.

At 12:15 pm, the coffin will be drawn on the gun carriage, followed on foot by members of the royal family led by the king, to Wellington Arch at Hyde Park Corner near Buckingham Palace, from where it will continue to Windsor by royal hearse.

The hearse will arrive at Windsor at 3:06 pm and make its way to the castle via the Long Walk avenue, again with flights stopped, as the castle is on the flight path into and out of Heathrow.

The king and senior members of the royal family will join the procession on foot from the Quadrangle at Windsor Castle at around 3:40 pm before the cortege halts at the chapel at 3:53 pm.

Monday's committal service is expected to be attended by at least 800 people, most of whom will not have been at the abbey.

They will include past and present staff members who worked for the queen.

At the end of the service the coffin will be lowered into the Royal Vault as the queen's piper plays a lament from the doorway and the Archbishop of Canterbury pronounces the blessing.

"God Save the King" will be sung and the service ends.

A private burial service will be held at 7:30 pm.

The queen's final resting place will be the King George VI memorial chapel, which is an annexe to the main chapel, alongside her husband Prince Philip.

The queen's mother and father -- King George VI and Queen Elizabeth the queen mother -- were interred there with the ashes of her younger sister Princess Margaret.