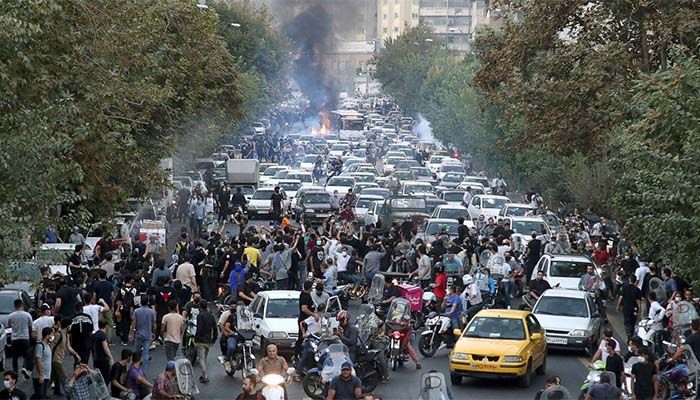 Protesters chant slogans during a protest over the death of a woman who was detained by the morality police in downtown Tehran, Iran, Sept. 21, 2022 || Photo: Collected

﻿The United States imposed sanctions on three Iranian officials on Wednesday for their role in the crackdown on protests in Kurdish-populated regions of the country.

"The Iranian regime is reportedly targeting and gunning down its own children, who have taken to the street to demand a better future," Treasury Undersecretary Brian Nelson said in a statement.

"The abuses being committed in Iran against protestors, including most recently in Mahabad, must stop," Nelson said.

The Iranian officials sanctioned hold posts in Iran's Kurdish regions, according to the Treasury Department.

"Since countrywide protests erupted after the killing of Mahsa Amini by Iran's 'morality police' in September 2022, the Kurdish cities in northwestern Iran, such as Sanandaj and Mahabad, have faced a particularly severe security response," the department said.

"In the past few days, dozens of protesters have reportedly been killed in the Kurdish region alone," it said.

Sanctions were imposed on Hassan Asgari, the governor of Sanandaj, Alireza Moradi, the head of law enforcement forces in Sanandaj, and Mohammad Taghi Osanloo, the commander of Islamic Revolutionary Guard Corps forces in Iran's West Azerbaijan province, which includes Mahabad.

Protests have gripped Iran since Amini, a 22-year-old of Kurdish origin, died on September 16, three days after her arrest in Tehran by the notorious morality police for allegedly breaching the Islamic dress code for women.

The rallies have been led by young women who have burned their headscarves and confronted security forces in the biggest wave of unrest to rock Iran for years.

In October, the United States placed over a dozen Iranian officials on its sanctions blacklist for the crackdown on the protests.

The sanctions block any assets those named might have under US jurisdiction and forbid US individuals or entities from doing business with them._AFP