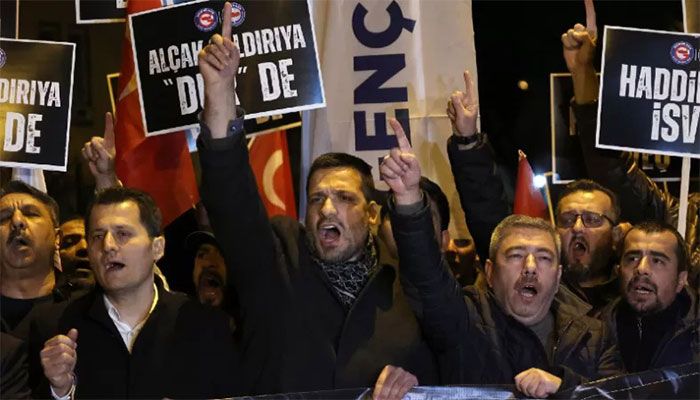 Protesters chant slogans during a demonstration outside the Sweden's embassy in Ankara on January 21, 2023 as Turkey denounced the permission granted to right-wing Swedish-Danish politician Rasmus Paludan to stage a protest in front of its embassy in the Swedish capital. || AFP Photo

﻿Sweden's bid for NATO membership is facing a dead end because Ankara's demands to Stockholm to hand over Kurdish activists and prevent rallies attacking Turkey's leadership have strained ties.

The chances of this changing after Turkey's parliamentary elections due in mid-May are uncertain, said Paul Levin, director of Stockholm University's Institute for Turkish Studies, reports AFP.

"We can now probably forget Turkish ratification before the elections, which seem to be scheduled for May 14," Levin told AFP.

"What happens after that depends in part on who wins."

And Erdogan is running for re-election.

In December, Sweden extradited a member of the Kurdistan Workers' Party (PKK) to Turkey. He had been convicted in a Turkish court and denied asylum in Sweden.

Erdogan wants more action from Stockholm against the PKK, listed as a terror group by Turkey and its Western allies.

"On one hand, there is a Turkish president who has jailed thousands over alleged insults and who wants to divert attention from a poor economy in the months before an election," said Levin.

"On the other hand, there are groups in Sweden who are against NATO membership and PKK supporters worried about the government's pledges to go after" them, he said.

Levin said these PKK supporters had realised they could provoke Erdogan "by insulting him and thereby stall the accession process".

A protest by a far-right politician in front of the Turkish embassy in Stockholm on Saturday -- authorised by the police -- has further strained relations.

Rasmus Paludan is a Swedish-Danish activist who has already been convicted for racist abuse.

He provoked rioting in Sweden last year when he went on a tour of the country and publicly burned copies of the Koran.

On Saturday, he burned another copy of the Muslim holy book after a speech of almost an hour denouncing Islam.

Police based their decision to authorise the protest on the basis of Sweden's liberal constitution, which protects the right to demonstrate.

Ankara summoned Sweden's ambassador to register its outrage, then cancelled a visit of Swedish Defence Minister Pal Jonson that had been scheduled for next Friday in Ankara -- a rare high-level meeting.

Earlier this month, Ankara called in Sweden's ambassador after pro-Kurdish activists hung an effigy of Erdogan from its feet, explicitly comparing him to Benito Mussolini.

Italy's Fascist dictator was left hanging upside down after his execution in the closing days of World War II.

Sweden's Prime Minister Ulf Kristersson denounced it as an attempt to sabotage the country's NATO membership bid -- but that sparked a backlash from some inside Sweden defending the right to freedom of expression.

Then last week, the leader of the far-right Sweden Democrats, Jimmie Akesson, whose party props up the Swedish government, denounced Erdogan as an "Islamist dictator".

He urged Kristersson not to appease Turkey "because it is ultimately an anti-democratic system and a dictator we are dealing with", Akesson told Swedish daily Dagens Nyheter.

Turkey is seeking the extradition of more Kurdish "terrorists" based in Sweden. Erdogan recently said there were as many as 130 there.

Stockholm has made it clear that the courts have the final say, but that does not appear to have satisfied Ankara.

Jens Stoltenberg, the secretary general of NATO, who last spring was talking of a fast-track membership process of just a few weeks, told AFP in January he still thought it would happen in 2023, even if he could not guarantee it.

Both Turkey and Hungary were still to ratify the bid, he pointed out.

Both countries have maintained links with Russia since its invasion of Ukraine, with Ankara in particular adopting the role of mediator between the two sides.

One spark of hope for Sweden is that Finland, which also launched its bid to join NATO following the Russian invasion, has made it clear that it does not want to enter the alliance without its "big brother".