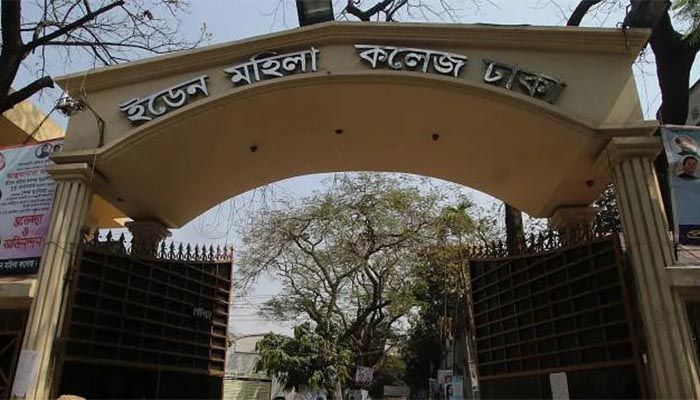 ﻿BCL activists of Eden College have allegedly attacked Samajtantrik Chhatra Front activists during a human chain rally in front of the College around 1.30 pm on Monday.

Eden College unit president of Samajtantrik Chhatra Front Saima Afroze, and general secretary Shahinur Shumi along with some other activists were injured in the attack.

Demanding proper justice for the incident, Injured Shahinur Shumi said they were attacked about ten minutes after submitting their memorandum to the principal.

“They abused us, tore our banner, and tried to snatch the phone of our president (Saima Afroze) to delete the videos. We have been organising different programmes since last month demanding to start bus services on eight routes and to improve the quality of the canteen food. As a part of that ongoing programme we submitted a memorandum to the principal,” she replied when asked about their programme.

“When we reached our tent at ‘Koroitola’ at the time, some BCL activists of Eden College under the leadership of Eden College Chhatra League president Jesmin Riva and general secretary Razia Sultana attacked us,” she said.

Samajtantrik Chhatra Front also alleged that BCL activists attacked them when they were collecting donation money for the flood-hit people of Sylhet.

Asked about the allegation, BCL president of Eden College Chhatra League Tamanna Jesmin Riva said, “As far as I know nothing such happened in the campus. There is college administration and everything have to go through a systematic process but they didn’t follow it.”

“There are around 40000 students in this College, if you want to collect money from the students you have to take permission from the administration but did they maintain it?” she added.

Condemning the attack, Samajtantrik Chhatra Front central panel formed a human chain in front of Raju sculpture of University of Dhaka at 3.30 pm in the afternoon.