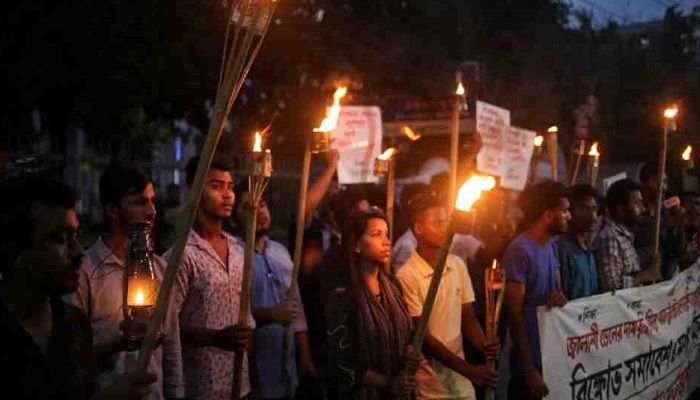 BSF's procession started from in front of the National Museum at Shahbagh which rounded via Kantaban and ended in front of Bangladesh Students’ Federation’s central office in front of Hatitpul Bazar.

Besides, some students staged a demonstration for one hour at Shahbagh intersection after failing to block the transports.

The government on Friday night raised prices of diesel by Tk 34 per litre, octane by Tk 46 per litre and petrol by Tk 44 per litre.

"Common people are already in hardship to cope with the rise of living cost. Government's looting of Public property and mismanagement led people toward this suffering,” the protesters said.

"The illegal fascist government is increasing the price of fuel oil without maintaining any policy. Fuel is a strategic product which will affect the prices of electricity, agricultural products, bus fares and other services," BSF General Secretary Soikot Ali said.

Moshiur Rahman, President of BSF, held the government's import policy responsible for the fuel crisis and said, "They adopted a short term policy to import for quick rental power plants instead of inventing its own gas fields and domestic resources. Price hike of the fuel oils will lead to increased bus fares and hamper food productions.”

Faiz Ullah, President of Bangladesh Students Union, said,  "The government has been looting people’s pockets and joshing with the people in the name of mega projects without keeping any specific account of import and export."

"Though the country has fallen in a bad state, the leaders of Awami League are getting richer. Those who could not eat fifteen years ago, have become owners of crores of taka by getting involved with the politics of Awami League," he added.