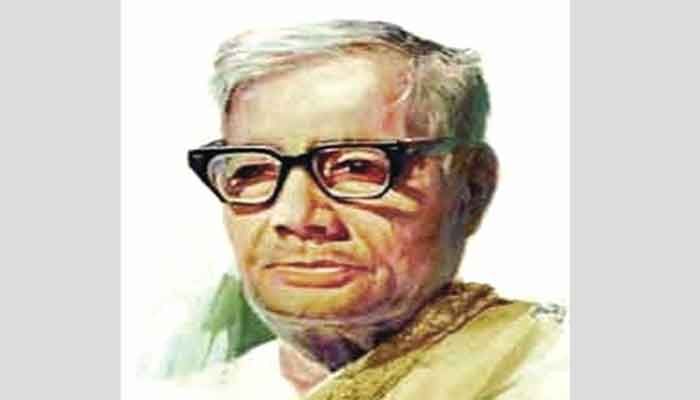 Jasimuddin, who is commonly known as Palli Kobi for his simple rural life, is being observed here today.

Jasimuddin, a Bengali poet, songwriter and folklore collector, was born on January 1, 1903 at Tambulkhana village on the outskirts of Faridpur town.

His poetry was a demonstration of simple and timeless appeal of rural Bengal and folk life.

He graduated from Calcutta University in 1929 and obtained MA in 1931 on Bengali literature. Earlier, he completed IA degree from Rajendra College in 1924 and matriculated from Faridpur Zilla School. He joined the Dhaka University as a lecturer in 1938 and left the job in 1944.

He then joined the Department of Information and Broadcasting until his retirement in 1962 as deputy director.

Jasimuddin started writing poems from his early age. His writing bears a strong flavor of folklore. He worked with Disneh Chandra Sen as a folklore collector and collected more than 10,000 folk songs.

He wrote the most celebrated poem Kabar (The Grave) while he was studying in Calcutta University. Later, the poem was placed in Bengali textbook of entrance level.

His legendary work Nakshi Kanthar Math (Field of the Embroidered Quilt) is considered a masterpiece and has been translated into many languages.

He was adorned with President’s Award for Pride of Performance, (1958), Pakistan, D.Litt by Rabindra Bharati University, India (1969), Ekushey Padak (1976), and Independence Award (posthumously) in 1978.

He died on March 14, 1976 in the capital and was later buried near his ancestral home at Govinapur.

Deputy Commissioner Atul Sarker attended a function as the chief guest on the occasion.

Literary and cultural personalities also joined it held at the yard of the poet’s house of Ambikapur village on Sunday morning.